A regulator of gene expression, retinoid X receptor (RXR), can boost scavenging cells in their mission to clear the brain of dead cells and debris after a stroke, thus limiting inflammation and improving recovery, according to preclinical research led by Jarek Aronowski, MD, PhD, of The University of Texas Health Science Center at Houston (UTHealth). 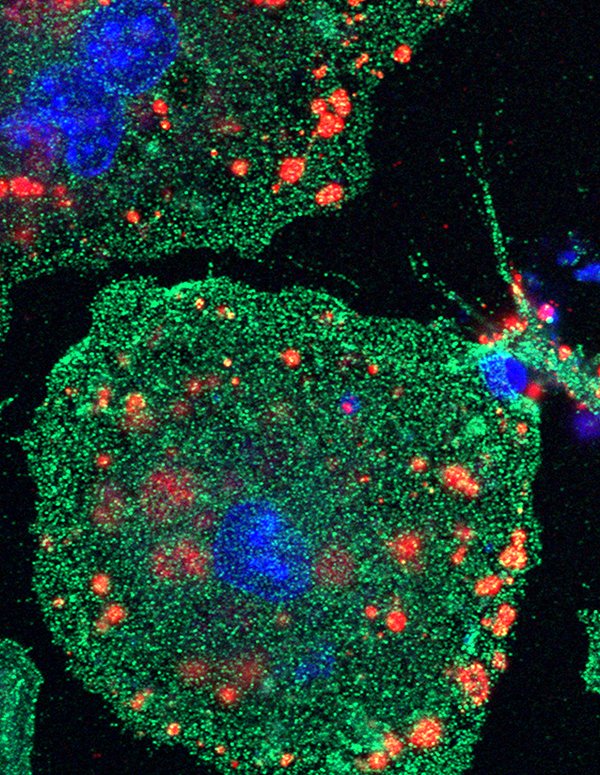 A phagocytic cell (green) with engulfed dead apoptotic neurons (red) during cleanup process in an image from the lab of Jarek Aronowski, MD, PhD. (Photo by Shun-Ming Ting, MS, UTHealth).
The discovery of RXR as a cleanup booster suggests that the molecule activating RXR could lead to discovery of a promising new therapeutic target. The study was published online this month in Stroke.

“RXR could enhance the cleanup and reduce the injury to brain tissue caused by the toxic byproducts created by an ischemic stroke,” said Aronowski, professor in the Department of Neurology at McGovern Medical School at UTHealth. “This could be a clinically relevant target for improving recovery.”

After a stroke, there is a buildup of dead cells and debris in the brain, a toxic environment that leads to damaging inflammation. Phagocytic immune cells, such as microglia and blood-derived macrophages, occur naturally in the body and act as toxic cleanup warriors. RXR appears to work by increasing potency of these warriors in combating the damaging effect of dead tissue while helping to boost brain repair.

Shun-Ming Ting, MS, was first author on the study, which was funded by the National Institute of Neurological Disorders and Stroke, part of the National Institutes of Health (1R01NS084292). Ting is a PhD student at The University of Texas MD Anderson Cancer Center UTHealth Graduate School of Biomedical Sciences.

Aronowski, who holds the Roy M. and Phyllis Gough Huffington Chair In Neurology at McGovern Medical School, is also a professor at the MD Anderson UTHealth Graduate School and a member of the UTHealth Institute for Stroke and Cerebrovascular Disease.

Zhao is also a professor at the MD Anderson UTHealth Graduate School and a member of the institute.