A new study shows how tiny robotic vessels powered by acoustic waves and an on-board bubble motor can be maneuvered through cellular landscapes using magnets.

A new study from the lab of Thomas Mallouk shows how microscale “rockets,” powered by acoustic waves and an onboard bubble motor, can be driven through 3D landscapes of cells and particles using magnets. The research was a collaboration between researchers at Penn and the University of San Diego, the Harbin Institute of Technology in Shenzhen, and Pennsylvania State University, where the study was initially conducted, and was published in Science Advances.

The origin story of the tiny rockets began with a fundamental scientific question: Could scientists design nano- and microscale vessels that use chemicals for fuel to travel through the human body? Fifteen years of research by Mallouk and others showed that the short answer was “yes,” but researchers faced significant barriers for using these vessels in biomedical applications because the chemicals they used for fuel, like hydrogen peroxide, were toxic. 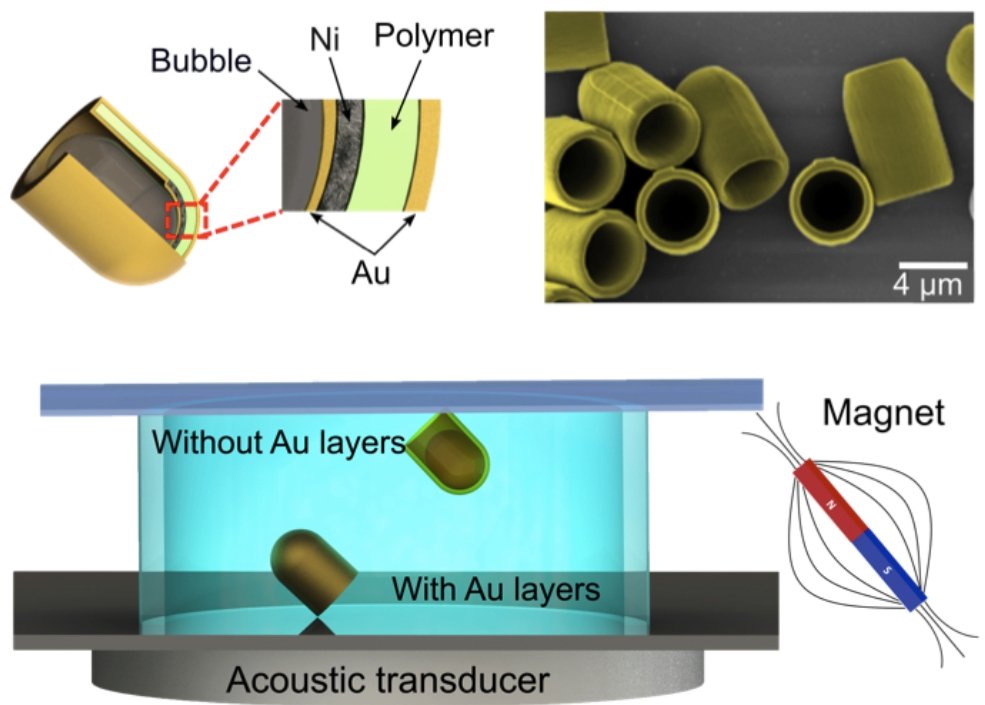 A schematic showing the structure the microrockets, which are 3D printed and contain a trapped air bubble (top left), and how they look under scanning electron microscopy (top right). The acoustic fluidic chamber where they can be driven in three dimensions is shown on the bottom. (Image: Liqiang Ren)

An “accidental” discovery led Mallouk and his group to focus on the use of a completely different type of fuel: sound waves. While trying to move their rockets with acoustic levitation, a process used to lift particles off a microscope slide with high-frequency sound waves, the group was surprised to find that ultrasound made the robots move at very fast speeds. Mallouk and his team decided to investigate this phenomenon further to see if they could use high-frequency sound waves to power their tiny vessels.

The group’s latest paper details the design of the microscale rockets, resembling a round-bottomed cup 10 microns in length and 5 microns wide, or about the size of a particle of dust. The rounded cups are 3D printed using laser lithography and contain an outer layer of gold and inner layers of nickel and a polymer. Treatment with a hydrophobic chemical after the gold is cast causes an air bubble to form and become trapped inside the rocket’s cavity.

In the presence of ultrasound waves, the bubble inside the rocket is excited by high-frequency oscillation at the water-air interface, which turns the bubble into an onboard motor. The rocket can then be steered using an external magnetic field. Each individual rocket has its own resonant frequency, meaning that each member of a fleet can be driven independently from the others. The tiny rockets are also incredibly adept, able to travel up microscopic staircases and swim freely in three dimensions with the help of special fins.

One of the rocket’s most unique features is their ability to move other particles and cells with sharp precision, even in crowded environments. The robotic vessels can either push particles in the desired direction or use a “tractor beam” approach to pull objects with an attractive force. Mallouk says the ability to push objects without disturbing the environment “wasn’t available on a larger scale,” adding that the tractor beam approach used by larger-sized vessels isn’t as good at precise movements. “There’s a lot of control you can do at this length scale,” he adds.

At this particular size, the rockets are large enough not to be impacted by Brownian motion, the random and erratic movements experienced by particles in the nanometer size range, but are small enough to move objects without disturbing the environment around them. “At this particular length scale, we’re right at the crossover point between when the power is enough to affect other particles,” says Mallouk.

By increasing or decreasing the amount of acoustic “fuel” the researchers provide the rockets, they can also control the speed of the tiny vessels. “If I want it to go slow, I can turn the power down, and if I want it to go really fast, I can turn the power up,” explains Jeff McNeill, a graduate student who works on nano- and microscale motor projects. “That’s a really useful tool.”

Mallouk and his lab are already exploring a number of possible areas of further research, including ways to actuate the rockets with light, and making even smaller rockets that would be faster and stronger for their size. Future collaborations with engineers and roboticists at Penn, including Dan Hammer, Marc Miskin, Vijay Kumar, James Pikul, and Kathleen Stebe, could help make the rockets “smart” by allowing them to outfit the vessels with computer chips and sensors to give them autonomy and intelligence.

As the group considers the micro-rocket’s broad medical potential from medical imaging to nano-robotics Mallouk says, “We’d like to have controllable robots that can do tasks inside the body: Deliver medicine, rotor rooter arteries, diagnostic snooping.”

This research was supported by National Science Foundation Grant DMR-1420620, which funds the Penn State Center for Nanoscale Science, a Materials Research Science and Engineering Center that supports collaborative, interdisciplinary research in the area of nanoscale materials.

Thomas Mallouk is the Vagelos Professor in Energy Research in the Department of Chemistry in the School of Arts and Sciences at the University of Pennsylvania.