Scientists from Tomsk Polytechnic University (TPU) and Siberian State Medical University (SSMU) develop a diagnosis system for neurodegenerative diseases at early stages. They are such diseases as multiple sclerosis, Parkinson’s disease and others. The diagnosis system is based on virtual reality technology – a person is immersed in a virtual environment to carry out some functional tests. Researchers change the parameters of the virtual environment and record changes in the person’s movements. The scientists are going to complete the technical part of the project in 2017. 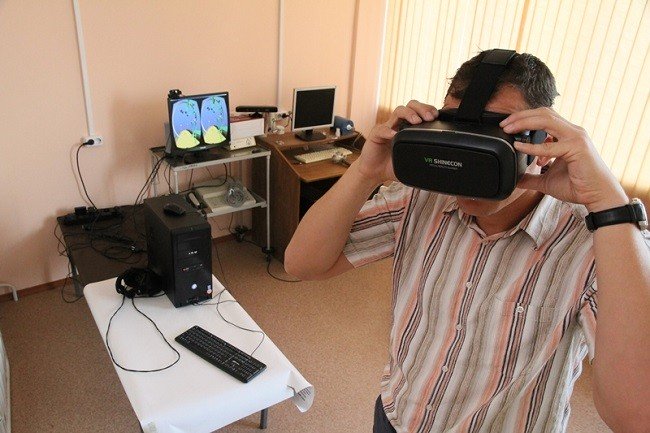 The diagnosis system for neurodegenerative diseases is a joint project for scientists from Tomsk Polytechnic University and Siberian State Medical University. The project involves eight people — scientists, postgraduate and graduate students of the universities.

«Our sense of balance and our movement are responsibilities of a number of systems. This is the vestibular apparatus — the inner ear and semicircular ducts — which determines our position in space and the direction of gravity. This is also muscular system and vision — it helps us to monitor constantly the horizon. All these coordinated systems operate automatically. They falter if a person gets neurodegenerative diseases to develop, for example, Parkinson’s disease,« — tells Ivan Tolmachov, senior instructor at the TPU Department of Industrial and Medical Electronics, associate professor at SSMU.

Parkinson’s diseases, multiple sclerosis, Alzheimer’s disease are neurodegenerative diseases. These are a group of slowly progressive, hereditary or acquired diseases of the nervous system. A common feature for these diseases is a progressive loss of nerve cells — neurodegeneration, leading to various neurological symptoms — primary to trouble with coordination.

According to scientists, for instance, in the case of Parkinson’s disease cell death process can start at age of 30 but the symptoms of the disease will be noticeable only at 50.

Therefore, scientists around the world are seeking effective and affordable diagnostics methods for neurodegenerative diseases at early stages.

«In order a person can feel function loss about 80% of related cells should be lost. But then there is no way back to recovery. Therefore, it is so important to diagnosis the disease at early stages when patient can get help. Currently physicians use definite tests to detect neurodegenerative diseases but they are mostly base on visual assessment and there is lack of instrumental and effective methods. PET scanning (Positron Emission Tomography) is available only in nine cities in Russia,« — notes Ivan Tolmachov.

The system being developed by TPU and SSMU scientists consists of augmented reality glasses, a contactless sensor controller and a mobile platform.

The developers use already existing devices such as Google augmented glasses and Kinect sensor system. Diagnosis is as follows: a person putting the glasses and gets into virtual reality where environment changes the slope. At this time the motion sensor detects changes of human body position in 20 points. A person without disorders quickly adapts to the virtual reality and keeps a stable position, a person with disorders can’t adapt and loses balance. 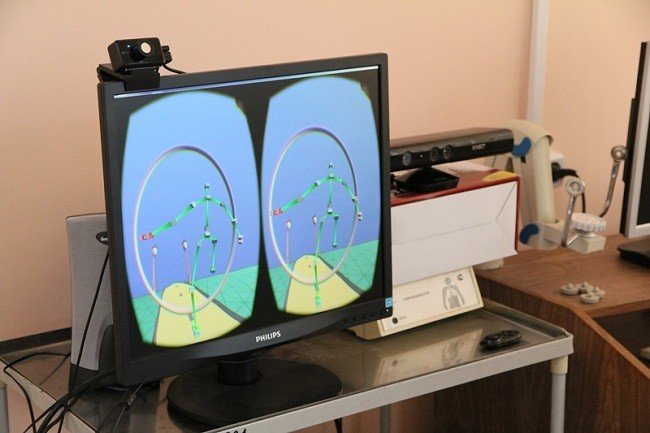 «We have integrated existing devices and developed mathematical models for data analysis. We have also created a human skeleton model, identified 20 important points that Kinect monitors. Diagnosis provides results of deviations in the 20 points,« — clarifies David Khachaturyan, a young scientist from TPU.

The system has been already tested by about 50 volunteers.

«In the experiment, we tested how virtual reality influences people. The procedure took almost 10 minutes. The experiment engaged both healthy people and those whom doctors had already been found disorders by. Currently we can’t say if a person is healthy or not, especially make a diagnosis. But thanks to the system we can say how much his condition differs from a healthy. We have also found out how people with different diseases react to a virtual environment. For instance, people with Parkinson’s disease get hand tremor (quick, rhythmic limb movements — Ed.), a more pronounced in the case of central nervous system,« — says Ivan Tolmachov.

To complete the technical part of the project will take a year more. Then the system will pass clinical trials and required technical and toxicological certification.

«In the future the system will be used not only for disease diagnosis but for patient rehabilitation as well,« — adds the scientist.