A study led by researchers in Switzerland has revealed a new cell type that resides in the body’s fat depots where it can actively suppress fat cell formation. This discovery was made using single-cell transcriptomics and opens entirely new avenues to combat obesity and related diseases such as diabetes. 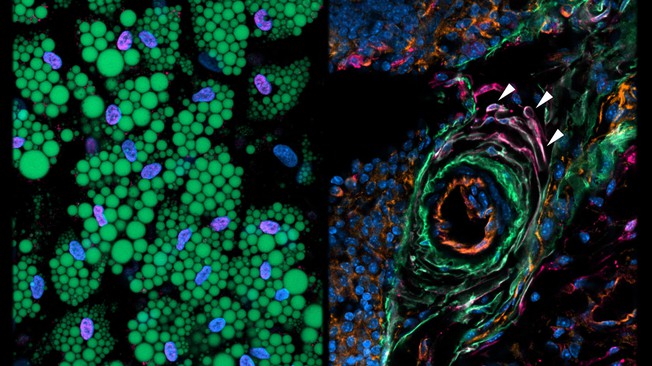 
Fat cells, or adipocytes, are at the center of nutritional and metabolic balance. Adipogenesis – the formation of mature fat cells from their precursor cells – has been linked to obesity and related health problems such as cardiovascular disease and type-2 diabetes.

However, it has proven very challenging to determine the identity and molecular properties of fat cell precursors. This is because, next to adipocytes and blood cells, fat tissue contains a large number of stromal cells that are difficult to distinguish using traditional approaches such as genetic labeling.

In a new study published in Nature, scientists from Bart Deplancke’s lab at EPFL, Christian Wolfrum’s lab at ETHZ, and the Swiss Stem Cell Foundation led by Gianni Soldati, have used a high-resolution technique called “single cell transcriptomics” to characterize, for the first time, the different types of stromal cells that reside within mature fat depots.

This technique provides a unique snapshot of which genes are expressed in a cell for thousands of cells at a time. Since cells of the same subpopulation will share similar gene expression profiles, the obtained data can be used to group cells according to their molecular similarity.

The scientists then followed up by examining human fat, where they discovered the presence of an analogous adipogenesis-suppressing cell population. These findings provide the hope that Aregs, or their mechanism of action, could be harnessed to modulate the plasticity of human adipose tissue. In the long run, this could improve our ability to control obesity and insulin sensitivity and thus to treat metabolic diseases including type-2 diabetes.

“Our work shows that there are still many human cell types that await discovery,” says Christian Wolfrum. “Several of these may be very important also for medical reasons such as the Aregs that we found in this study.”

“Controlling fat cell formation is not only important for improving metabolic health,” says Bart Deplancke. “It could also be important for slowing aging, since several tissues, such as bone marrow and muscle, accumulate fat cells over time, which negatively affects their function. Our discovery has therefore widespread biomedical implications and we cannot wait to learn more about these intriguing cells.”