Blocking this process, known as trogocytosis, improved the ability of a CAR T cell therapy to treat cancer in mice, according to research led by School of Veterinary Medicine scientists. 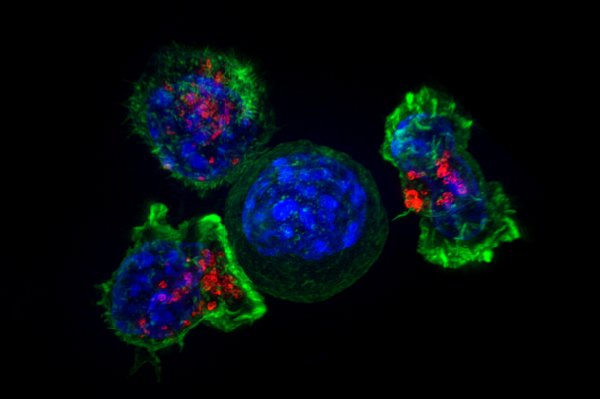 Tcells surround a cancer cell to finish it off, but such interactions do not always end with the T cells victorious.
Researchers from Penn detail how cancer cells can prompt T cells to ingest bits of cancer cell membrane, a process known as trogocytosis.
The cancer may evade immune detection as a result.
(Image: Alex Ritter, Jennifer Lippincott Schwartz and Gillian Griffiths, National Institutes of Health)

The immune system is equipped to respond not just to external invaders—think viruses, bacteria, and parasites—but also to internal threats, namely, cancer. Yet, frequently, malignancies overcome the immune system’s defenses and evade detection.

In a new study, researchers led by Serge Y. Fuchs of the School of Veterinary Medicine, have uncovered a detailed mechanism by which tumors can skirt both the immune system and cancer therapies that leverage its power, such as genetically engineered CAR T cells.

Their investigation, published in the journal Cell Metabolism, revealed how tumor-derived factors stimulate trogocytosis—a process derived from the Greek word trogo, which means “to gnaw” or “to chew.” When T cells interact with cancer cells, they can sometimes “nibble” a piece of the cancer cell membrane. When that membrane segment includes an antigen, a molecule specific to the cancer, the T cells may then begin expressing that antigen on their own cell surface, making it appear to other T cells like a cancer cell.

Trogocytosis can affect a patient’s own T cells and those modified to become CAR T cells, an approach in which a patient’s T cells are genetically engineered to specifically target cancer cells, grown in a lab, and then delivered back to the patient.

“Trogocytosis can lead to three different things, and all three are bad for a person with a tumor,” says Fuchs, the senior author on the work. “First of all, the tumor cell did not get killed and has lost an antigen, which may mean that even if another, better equipped T cell comes along, it will not recognize it, giving cancer cells a window of opportunity to grow unchecked. The second problem is, for reasons we still don’t understand, once a T cell takes a piece of the tumor cell membrane, it becomes much less active. And the third problem is very ironic. Because now, a T cell that displays tumor antigen, this ‘sheep in wolf’s clothing,’ may then become victim to ‘fratricide,’ killed by another T cell.” Overall, the result is a decline in killer T cell numbers and activity and a bump in opportunities for the cancer cells to escape detection and grow.

“What we see is that only a small number of cells undergo trogocytosis, and then they disappear quickly because they’re killed. So we’re studying a vanishing act. It is hard to do—very expensive and very tedious—but it appears to be very important,” says Fuchs.

With a longstanding interest in how receptors on the surface of immune cells guide anti-cancer immunity, Fuchs and colleagues have made a variety of discoveries showing how tumors can manipulate T cells to escape being targeted and killed.

A particular area of interest is what’s known as tumor-derived factors, or the concoction of proteins, lipids, and other materials that cancer cells secrete into the body. In the current study, the Penn researchers found that collecting these secretions and exposing the resulting solution to T cells hampered the cells’ ability to do their cancer-fighting job.

“Just exposing them to this tumor-conditioned media caused them to kill fewer cancer cells, trogocytose more, and get killed more,” Fuchs says.

Trogocytosis was previously believed to have something to do with cancer’s ability to hinder anti-cancer immunity, but the Penn-led team pinned down the mechanism, showing that T cells exposed to tumor-derived factors experienced a notable decline in levels of the gene CH25H. This gene is known to be involved in altering cell’s lipid membranes and can inhibit two cell membranes from fusing together—an essential process for trogocytosis to occur. When they added back a metabolite produced by CH25H, they could block trogocytosis.

Further characterization of the pathway helped the team identify another player, the gene ATF3, which opposes the activity of CH25H. Eliminating AFT3 prevented trogocytosis from occurring and restored the ability of T cells to kill tumor cells.

Not only do the new insights suggest novel targets for anti-cancer therapies, but they may have immediate significance for CAR T therapy. Since trogocytosis could impair the effectiveness of the engineered T cells delivered in CAR T, the researchers surmised that blocking this could improve CAR T performance. “We figured, why don’t we use what is cleverly known as an ‘armored CAR’ approach, and co-express CH25H in the CAR T,” Fuchs says. “This turned out to be more efficient than the old CAR T cells.”

Indeed, delivering the CAR T cells adorned with CH25H improved the survival of mice with cancer compared to the unarmored CAR T cells.

Though only a small percentage of T cells are involved in trogocytosis, Fuchs says it may be an underappreciated process when it comes to cancer immunity and other processes, such as those involved in autoimmunity. With future work, he and colleagues intend to explore the roles of ATF3 and CH25H and other molecules in trogocytosis. And he’s hopeful that other researchers will pick up on these lines of work, bringing the findings closer to clinical application.

“I can see this going into use in CAR T therapy quickly,” Fuchs says. “It’s ready to play.”

Serge Fuchs is the Elizabeth and William Whitney Clark Professor of Oncology at the University of Pennsylvania School of Veterinary Medicine.