The research team at DGIST developed ciliary microrobots with high propulsion efficiency in  fluid environments in the human body such as blood by mimicking the movement of paramecia’s cilia. The ciliary microrobots are for chemical and cell delivery that can be precisely controlled and that move via ciliary motion.
Professor Choi’s research team succeeded in fabricating the world’s first ciliary microrobots utilizing processing technology and asymmetric magnetic drive technology by applying microorganism’s ciliary movement, which thus far had only been theorized but never put into practice. 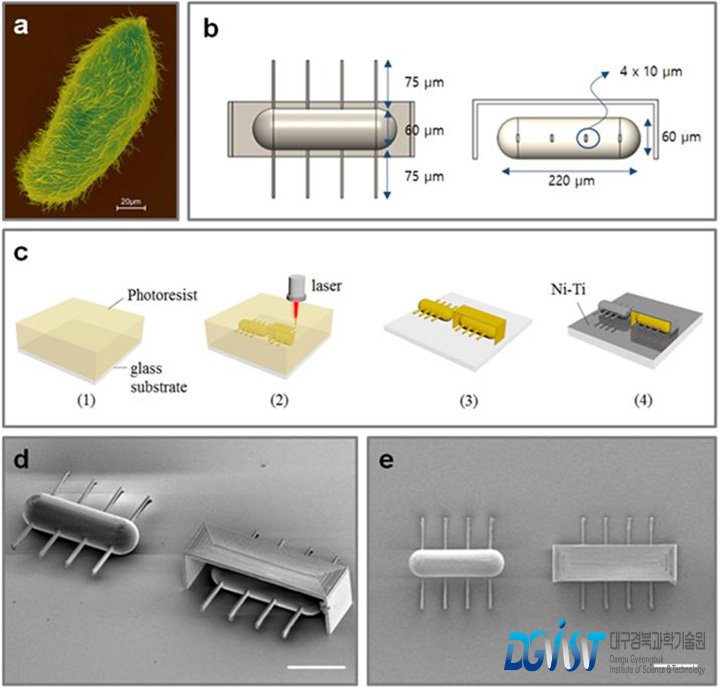 Microrobots that use propulsion mechanisms such as spiral drive motion and progressive wave motion were first realized and implemented at the Zurich Federal Institute of Technology, Switzerland; University of Twente, Netherlands; and Harvard University, USA. However, the development of microrobots that move utilizing ciliary motion has thus far been absent due to the difficulty of producing a microstructure with a large number of cilia as well as with asymmetrical drive.

In addition, the team verified that the speed and propulsion efficiency of their microrobots were much higher than those of existing conventional microrobots moving under magnetic attraction drive after measuring the ciliary microrobots’ movement utilizing asymmetrical magnetic actuation technology.

In comparison to previously developed microrobots, Professor Choi’s ciliary microrobots are expected to deliver higher amounts of chemicals and cells to target areas in the highly viscous body environment thanks to their ability to freely change direction and to move in an 80 sphere to the target point shown in the experiment using the magnetic field.

Professor Choi from DGIST’s Department of Robotics Engineering said, «With precise fabrication techniques and magnetic control technology, my team has developed microrobots mimicking cilia’s asymmetric reciprocation movement, which has been never realized so far. We’ll continually strive to study and experiment on microrobots that can efficiently move and operate in the human body, so that they can be utilized in chemical and cell delivery as well as in  surgery.»