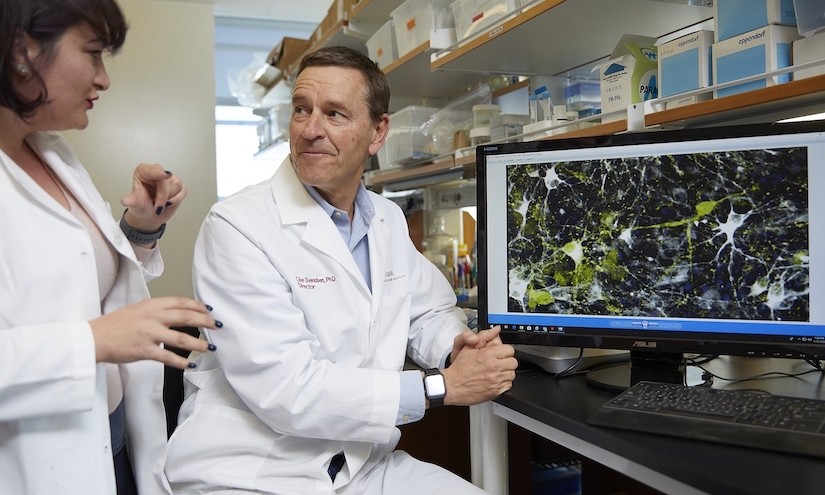 
People who develop Parkinson’s disease before age 50 may have been born with disordered brain cells that went undetected for decades, according to new Cedars-Sinai research. The research points to a drug that potentially might help correct these disease processes.

Parkinson’s occurs when brain neurons that make dopamine, a substance that helps coordinate muscle movement, become impaired or die. Symptoms, which get worse over time, include slowness of movement, rigid muscles, tremors and loss of balance. In most cases, the exact cause of neuron failure is unclear, and there is no known cure.

At least 500,000 people in the U.S. are diagnosed with Parkinson’s, with approximately 60,000 new patients each year. Although most patients are 60 or older when they are diagnosed, about 10% are between 21 and 50 years old. The new study, published in the journal Nature Medicine, focuses on these young-onset patients.

"Young-onset Parkinson’s is especially heartbreaking because it strikes people at the prime of life,” said Michele Tagliati, MD, director of the Movement Disorders Program, vice chair and professor in the Department of Neurology at Cedars-Sinai. "This exciting new research provides hope that one day we may be able to detect and take early action to prevent this disease in at-risk individuals." Tagliati was a co-author of the study.

To perform the study, the research team generated special stem cells, known as induced pluripotent stem cells (iPSCs), from cells of patients with young-onset Parkinson’s disease. This process involves taking adult blood cells "back in time" to a primitive embryonic state. These iPSCs can then produce any cell type of the human body, all genetically identical to the patient’s own cells. The team used the iPSCs to produce dopamine neurons from each patient and then cultured them in a dish and analyzed the neurons' functions.

Young-onset Parkinson’s is especially heartbreaking because it strikes people at the prime of life. This exciting new research provides hope that one day we may be able to detect and take early action to prevent this disease in at-risk individuals.

"Our technique gave us a window back in time to see how well the dopamine neurons might have functioned from the very start of a patient’s life,” said Clive Svendsen, PhD, director of the Cedars-Sinai Board of Governors Regenerative Medicine Institute and professor of Biomedical Sciences and Medicine at Cedars-Sinai. He was the study’s senior author.

The researchers detected two key abnormalities in the dopamine neurons in the dish:

"What we are seeing using this new model are the very first signs of young-onset Parkinson’s," said Svendsen. "It appears that dopamine neurons in these individuals may continue to mishandle alpha-synuclein over a period of 20 or 30 years, causing Parkinson’s symptoms to emerge."

The investigators also used their iPSC model to test a number of drugs that might reverse the abnormalities they had observed. They found that that one drug, PEP005, which is already approved by the Food and Drug Administration for treating precancers of the skin, reduced the elevated levels of alpha-synuclein in both the dopamine neurons in the dish and in laboratory mice.

The drug also countered another abnormality they found in the patients' dopamine neurons — elevated levels of an active version of an enzyme called protein kinase C — although the role of this enzyme version in Parkinson's is not clear.

For the next steps, Tagliati said the team plans to investigate how PEP005, currently available in gel form, might be delivered to the brain to potentially treat or prevent young-onset Parkinson’s. The team also plans more research to determine whether the abnormalities the study found in neurons of young-onset Parkinson's patients also exist in other forms of Parkinson’s.

"This research is an outstanding example of how physicians and investigators from different disciplines join forces to produce translational science with the potential to help patients," said Shlomo Melmed, MB, ChB, executive vice president of Academic Affairs and dean of the Medical Faculty at Cedars-Sinai. "This important work is made possible by the dual leadership of Cedars-Sinai as both a distinguished academic institution and an outstanding hospital."

The study's co-first authors were postdoctoral fellow Alexander Laperle, PhD, and project scientists Samuel Sances, PhD, and Nur Yucer, PhD, all from Svendsen’s laboratory. Besides the Regenerative Medicine Institute and Neurology, the study involved the Department of Biomedical Sciences, Center for Bioinformatics and Functional Genomics, Smidt Heart Institute, Samuel Oschin Comprehensive Cancer Institute and the Research Division of Immunology at Cedars-Sinai, along with UCLA.

Funding: This work was supported by the Joseph Drown Foundation, the Cedars-Sinai Board of Governors Regenerative Medicine Institute, the National Institutes of Health under award number 5UG3NS105703-02, the Widjaja Family Foundation and the Advanced Clinical Biosystems Research Institute at Cedars-Sinai.

Competing interests: Intellectual property protection is pending for disease modeling, diagnostics and drug screening for molecular signatures of early-onset sporadic Parkinson’s disease, and the use of PEP005 for Parkinson’s disease.