A team of SMU biological scientists has confirmed that P-glycoprotein (P-gp) has the ability to remove a toxin from the brain that is associated with Alzheimer’s disease.

The finding could lead to new treatments for the disease that affects nearly 6 million Americans. It was that hope that motivated lead researchers James W. McCormick and Lauren Ammerman to pursue the research as SMU graduate students after they both lost a grandmother to the disease while at SMU.

In the Alzheimer’s brain, abnormal levels of amyloid-β proteins clump together to form plaques that collect between neurons and can disrupt cell function. This is believed to be one of the key factors that triggers memory loss, confusion and other common symptoms from Alzheimer’s disease.

“We were able to demonstrate both computationally and experimentally that P-gp, a critical toxin pump in the body, is able to transport this amyloid-β protein,” said John Wise, associate professor in the SMU Department of Biological Sciences and co-author of the study published in PLOS ONE.

“If you could find a way to induce more P-glycoprotein in the protective blood-brain barrier for people who are susceptible to Alzheimer’s disease, perhaps they could take such a treatment and it would help postpone or prevent the onset of the disease,” he said. Wise stressed that the theory needs more research.

The SMU (Southern Methodist University) study also provides strong evidence for the first time that P-gp may be able to pump out much larger toxins than previously believed. 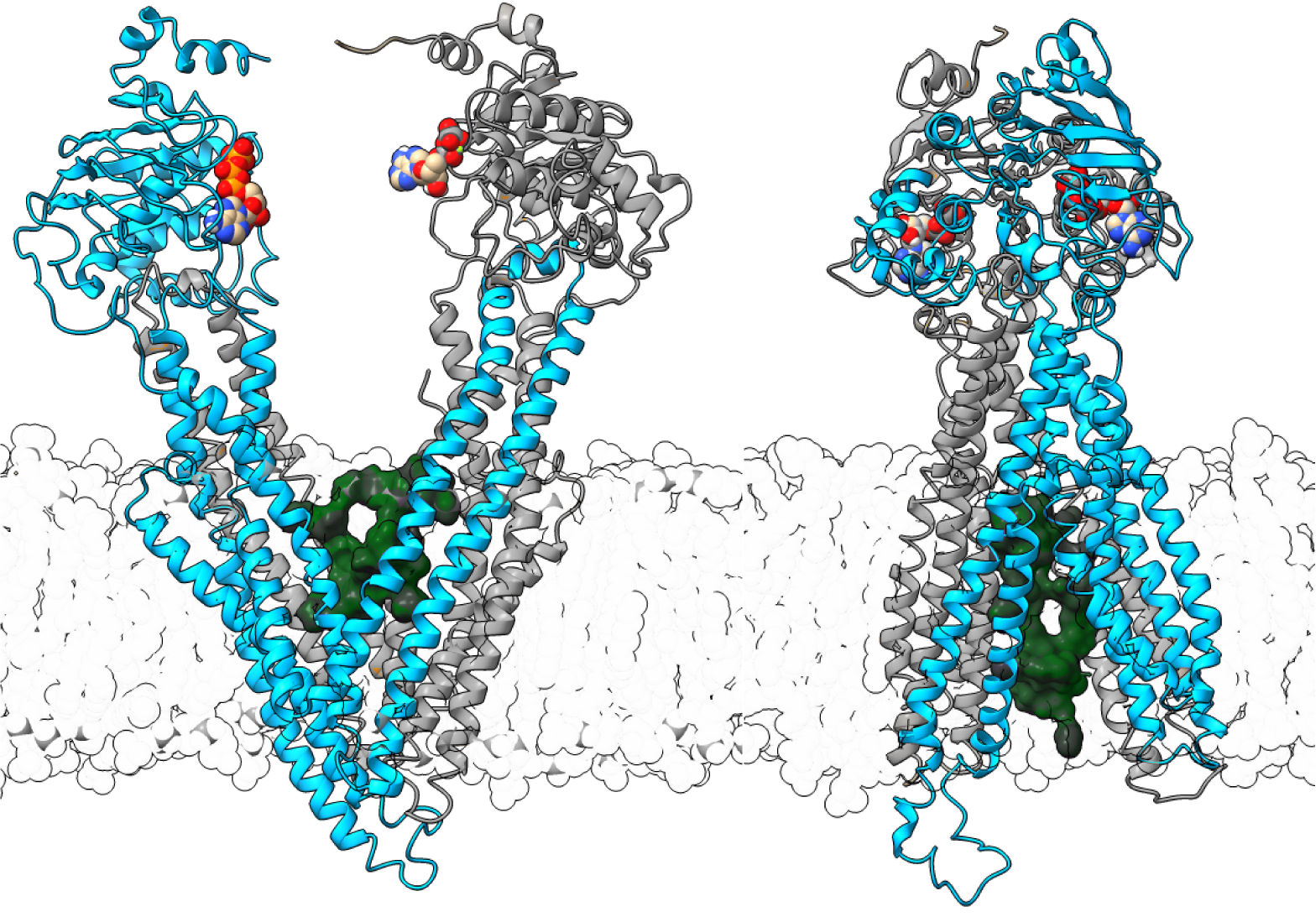 (A) The first frame of SMU's simulation shows amyloid-β bound to the drug binding domains of P-gp. (B) The final frame of the same simulation shows P-gp pushing an amyloid protein through the cell membrane to outside the cell.

P-gp is nature’s way of removing toxins from cells. Similar to how a sump pump in your house removes water from the basement, P-gp swallows harmful drugs or toxins within the cell and then spits them back outside the cell.

“You find P-gp wherever the body is looking to protect an organ from toxins, and the brain is no exception,” explained co-author Pia Vogel, SMU professor and director of SMU's Center for Drug Discovery, Design and Delivery.

Amyloid-β’s large size created questions about whether P-glycoprotein could actually inhale it and pump it back out.

“Amyloid-β is maybe five times bigger than the small, drug-like molecules that P-glycoproteins are well-known to move. It would be like taking New York pizza and trying to stuff that whole slice in your mouth and swallow it,” Wise said.

The fact that P-gp appears to be able to do just that “greatly expands the possible range of things that P-gp can transport, which opens the possibility that it may interact with other factors that were previously thought impossible,” said McCormick, a former SMU graduate student in biological sciences.

The research was personal

SMU researchers might never have investigated the link between P-gp and amyloid-β proteins if not for McCormick’s dogged pursuit of the connection. The Ph.D. student, who graduated in 2017, had seen preliminary work suggesting that P-gp might play a role in pulling amyloid protein out of the brain and asked his faculty advisors, Vogel and Wise, if he could take some time to check it out.

The professors concede they first tried to discourage him because they were more focused on P-gp’s role in creating resistance to chemotherapy in cancer patients. However, McCormick was “passionate,” about figuring out if P-gp might be able to shield someone from getting Alzheimer’s, Vogel said.

He devoted hours of his own time to use a computer-generated model of P-glycoprotein that he and Wise created. The model allows researchers to dock nearly any drug to the P-gp protein and observe how it would behave in P-gp’s “pump.” Vogel, Wise and other SMU scientists have been studying the protein for years to identify compounds that might reverse chemotherapy failure in aggressive cancers.

McCormick completed the computational work with the help of his fiancé, Ammerman, who got her Ph.D in biology from SMU in May.

Together, they ran multiple simulations of the P-gp protein using SMU’s high performance computer, ManeFrame II, and found that each time, P-gp was able to “swallow” amyloid-β proteins and push them out of cells.

“For the scientist in me, it was just absolutely amazing that this pump could consume something that big,” Vogel said. “John [Wise] and I did not predict that would be possible.”

The researchers conducted two experiments in the lab to confirm the computational results.

Another in vitro experiment reached the same conclusion from a different direction. Former graduate student Gang (Mike) Chen worked in SMU’s Center for Drug Discovery, Design and Delivery to show that an Alzheimer’s-linked amyloid-β caused changes in the P-gp’s usage of adenosine triphosphate (ATP), indicating that there was a physical interaction between the two.

ATP hydrolysis produces the energy that P-gp uses to transport toxins or drugs out of the cell. When no toxins are present, P-gp’s rate of ATP stays pretty low. When challenged with transporting cargo, P-gp’s ATP hydrolysis activity usually increases quite dramatically.

“Even though our work can’t help our grandparents, I hope that it might help others in the future,” Ammerman said. “The more we know, the more power we have – and researchers after us – to address and target these devastating diseases.”