Neurological disorders such as Parkinson’s disease and epilepsy have had some treatment success with deep brain stimulation, but those require surgical device implantation. A multidisciplinary team at Washington University in St. Louis has developed a new brain stimulation technique using focused ultrasound that is able to turn specific types of neurons in the brain on and off and precisely control motor activity without surgical device implantation.

The team, led by Hong Chen, assistant professor of biomedical engineering in the McKelvey School of Engineering and of radiation oncology at the School of Medicine, is the first to provide direct evidence showing noninvasive, cell-type-specific activation of neurons in the brain of mammal by combining ultrasound-induced heating effect and genetics, which they have named sonothermogenetics. It is also the first work to show that the ultrasound- genetics combination can robustly control behavior by stimulating a specific target deep in the brain.

Results of the three years of research, which was funded in part by the National Institutes of Health’s BRAIN Initiative, were published online in Brain Stimulation May 11, 2021. 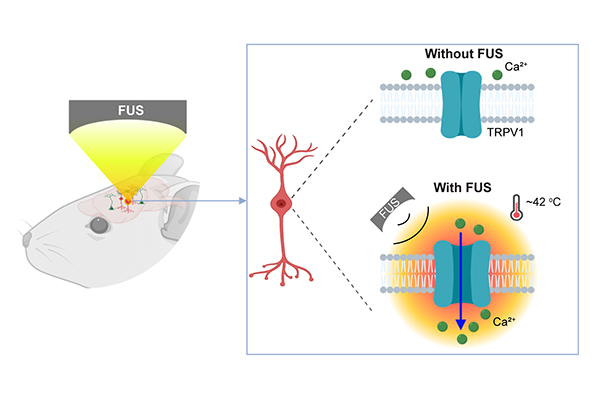 The senior research team included renowned experts in their fields from both the McKelvey School of Engineering and the School of Medicine, including Jianmin Cui, professor of biomedical engineering; Joseph P. Culver, professor of radiology, of physics and of biomedical engineering; Mark J. Miller, associate professor of medicine in the Division of Infectious Diseases in the Department of Medicine; and Michael Bruchas, formerly of Washington University, now professor of anesthesiology and pharmacology at the University of Washington.

“Our work provided evidence that sonothermogenetics evokes behavioral responses in freely moving mice while targeting a deep brain site,” Chen said. “Sonothermogenetics has the potential to transform our approaches for neuroscience research and uncover new methods to understand and treat human brain disorders.”

Using a mouse model, Chen and the team delivered a viral construct containing TRPV1 ion channels to genetically-selected neurons. Then, they delivered small burst of heat via low-intensity focused ultrasound to the select neurons in the brain via a wearable device. The heat, only a few degrees warmer than body temperature, activated the TRPV1 ion channel, which acted as a switch to turn the neurons on or off.

“We can move the ultrasound device worn on the head of free-moving mice around to target different locations in the whole brain,” said Yaoheng Yang, first author of the paper and a graduate student in biomedical engineering. “Because it is noninvasive, this technique has the potential to be scaled up to large animals and potentially humans in the future.”

The work builds on research conducted in Cui’s lab that was published in Scientific Reports in 2016. Cui and his team found for the first time that ultrasound alone can influence ion channel activity and could lead to new and noninvasive ways to control the activity of specific cells. In their work, they found that focused ultrasound modulated the currents flowing through the ion channels on average by up to 23%, depending on channel and stimulus intensity. Following this work, researchers found close to 10 ion channels with this capability, but all of them are mechanosensitive, not thermosensitive.

The work also builds on the concept of optogenetics, the combination of the targeted expression of light-sensitive ion channels and the precise delivery of light to stimulate neurons deep in the brain. While optogenetics has increased discovery of new neural circuits, it is limited in penetration depth due to light scattering and requires surgical implantation of optical fibers.

Sonothermogenetics has the promise to target any location in the mouse brain with millimeter-scale resolution without causing any damage to the brain, Chen said. She and the team continue to optimize the technique and further validate their findings.

The McKelvey School of Engineering at Washington University in St. Louis promotes independent inquiry and education with an emphasis on scientific excellence, innovation and collaboration without boundaries. McKelvey Engineering has top-ranked research and graduate programs across departments, particularly in biomedical engineering, environmental engineering and computing, and has one of the most selective undergraduate programs in the country. With 140 full-time faculty, 1,387 undergraduate students, 1,448 graduate students and 21,000 living alumni, we are working to solve some of society’s greatest challenges; to prepare students to become leaders and innovate throughout their careers; and to be a catalyst of economic development for the St. Louis region and beyond.