Most vaccines direct the adaptive immune system to fight off infections with one arm tied behind its back. A new study in monkeys untied the other arm. 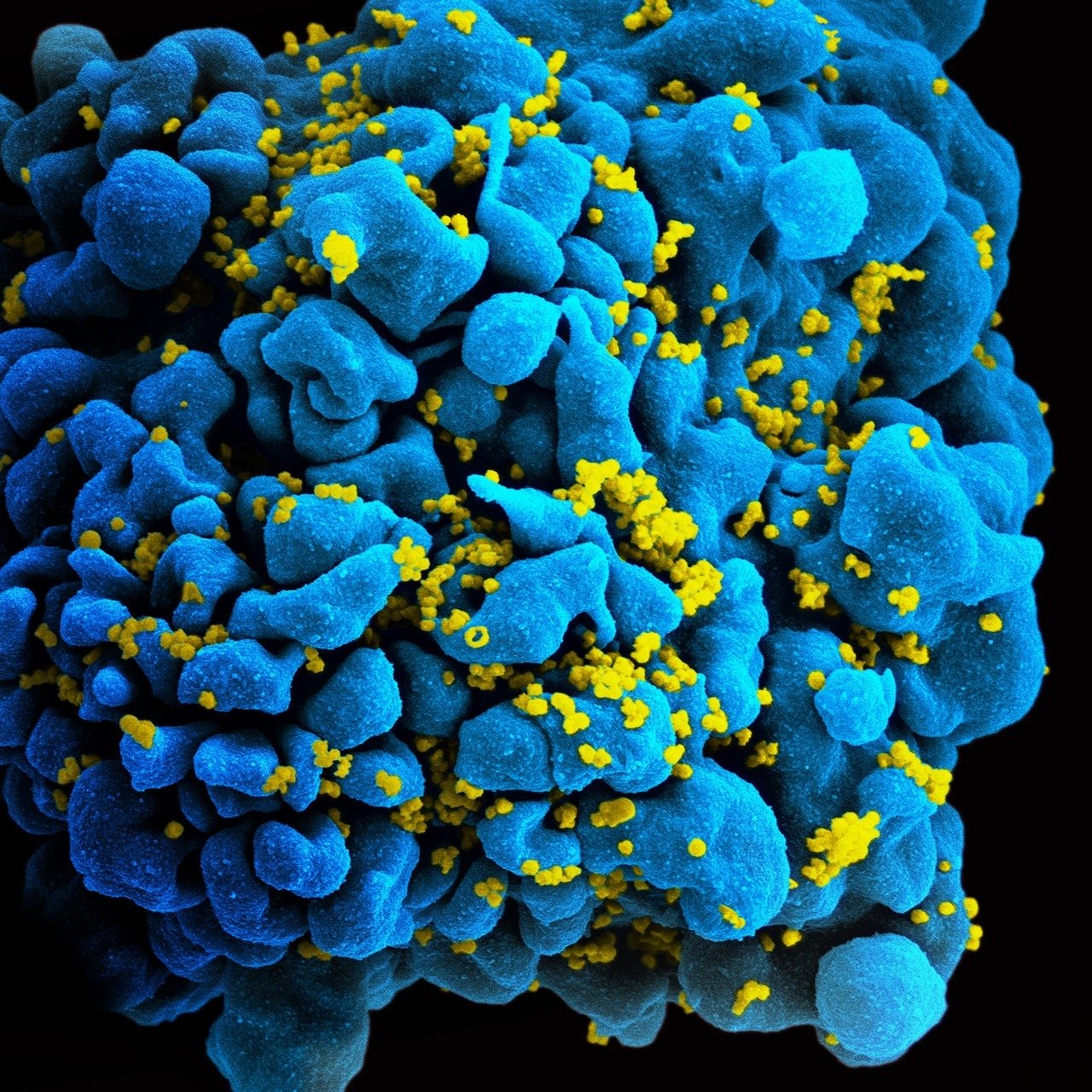 An electron micrograph of a human cell infected with HIV, the virus that causes AIDS. The yellow dots are HIV particles.
National Institute of Allergy and Infectious Diseases

Investigators at the School of Medicine and several other institutions have shown that a new type of vaccination can substantially enhance and sustain protection from HIV.

A paper describing the vaccine, which was given to monkeys, was published online May 11 in Nature Medicine. The findings carry broad implications for immunologists pursuing vaccines for the coronavirus and better vaccines for other diseases, said Bali Pulendran, PhD, professor of pathology and of microbiology and immunology at Stanford.

The key to the new vaccine’s markedly improved protection from viral infection is its ability — unlike almost all vaccines now in use — to awaken a part of the immune system that most current vaccines leave sleeping.

“Most vaccines aim at stimulating serum immunity by raising antibodies to the invading pathogen,” said Pulendran, referring to antibodies circulating in blood. “This vaccine also boosted cellular immunity, the mustering of an army of immune cells that chase down cells infected by the pathogen. We created a synergy between these two kinds of immune activity.”

Some 38 million people worldwide are living with AIDS, the once inevitably fatal disease caused by HIV. While HIV can be held in check by a mix of antiviral agents, it continues to infect 1.7 million people annually and is the cause of some 770,000 deaths each year.

“Despite over three decades of intense research, no preventive HIV vaccine is yet in sight,” Pulendran said. Early hopes for such a vaccine, based on a trial in Thailand whose results were published in 2012, were dashed just months ago when a larger trial of the same vaccine in South Africa was stopped after a preliminary assessment indicated that it barely worked.

Vaccines are designed to arouse the adaptive immune system, which responds by generating cells and molecular weaponry that target a particular pathogen, as opposed to firing willy-nilly at anything that moves.

The adaptive immune response consists of two arms: serum immunity, in which B cells secrete antibodies that can glom onto and neutralize a microbial pathogen; and cellular immunity, in which killer T cells roam through the body inspecting tissues for signs of viruses and, upon finding them, destroying the cells that harbor them.

But most vaccines push the adaptive immune system to fight off infections with one of those arms tied behind its back.

In the new study, he and his colleagues employed a two-armed approach geared toward stimulating both serum and cellular immunity. They inoculated three groups of 15 rhesus macaques over a 40-week period. The first group received several sequential inoculations of Env, a protein on the virus’s outer surface that’s known to stimulate antibody production, plus an adjuvant, a chemical combination often used in vaccines to beef up overall immune response. The second group was similarly inoculated but received additional injections of three different kinds of viruses, each modified to be infectious but not dangerous. Each modified virus contained an added gene for a viral protein, Gag, that’s known to stimulate cellular immunity.

A third group, the control group, received injections containing only the adjuvant.

At the end of the 40-week regimen, all animals were allowed to rest for an additional 40 weeks, then given booster shots of just the Env inoculation. After another rest of four weeks, they were subjected to 10 weekly exposures to SHIV, the simian version of HIV.

Monkeys who received only the adjuvant became infected. Animals in both the Env and Env-plus-Gag groups experienced significant initial protection from viral infection. Notably, though, several Env-plus-Gag animals — but none of the Env animals — remained uninfected even though they lacked robust levels of neutralizing antibodies. Vaccinologists generally have considered the serum immune response — the raising of neutralizing antibodies — to be the defining source of a vaccine’s effectiveness.

Pulendran said he suspects this improvement resulted from the vaccine-stimulated production of immune cells called tissue-resident memory T cells. These cells migrate to the site where the virus enters the body, he said, and park themselves there for a sustained period, serving as sentinels. If they see the virus again, these cells jump into action, secreting factors that signal other immune-cell types in the vicinity to turn the tissue into hostile territory for the virus.

“These results suggest that future vaccination efforts should focus on strategies that elicit both cellular and neutralizing-antibody response, which might provide superior protection against not only HIV but other pathogens such as tuberculosis, malaria, the hepatitis C virus, influenza and the pandemic coronavirus strain as well,” Pulendran said.

Stanford’s Department of Microbiology and Immunology also supported the work.