Scientists have modified nanodiamonds, used as drug carriers, in order to extend the release time and therapeutic effect of drugs. The effect of nanoparticles has been tested on corticosteroids, which are hormonal drugs used to treat a number of diseases. The research results are published in the journal Applied Surface Science. 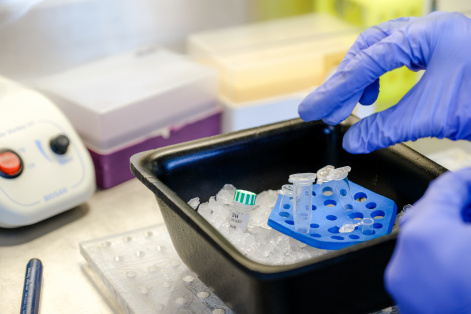 Detonation nanodiamonds have a number of exceptional properties, for example, they are biocompatible and low toxic to the cells of living organisms, and with the help of relatively simple modifications it is possible to change the chemical composition of their surface. Due to these properties, nanodiamonds are used in optics, electronics, biomedicine, analytical chemistry, as well as in the production of lubricants and composite materials.

Nanodiamonds are capable of adsorbing, in other words, binding, on their surface, various substances, including medicinal ones. This allows using nanodiamonds to create systems for targeted drug delivery to a diseased organ and to provide a long-term therapeutic effect. The use of such systems will lead to an increase in the therapeutic efficiency of drugs by reducing their dosage and a long-term pharmacological effect. However, prolonged release of drugs is still a problem.

A team of researchers from South Korea and Russia, which included biophysicists of the Federal Research Center "KSC SB RAS", adsorbed drugs on nanodiamonds by modifying their surface and increased the duration of the drug release from the created complex. In experiments, scientists demonstrated the applicability of the modified nanodiamonds as carriers of corticosteroids, namely hormones produced by adrenal glands.

For the modification, scientists treated the detonation nanodiamonds with sodium chloride. After that, the nanoparticles increased colloidal stability in an aqueous solution, that is, the ability not to stick together and not to precipitate for a long time. Moreover, after such treatment, the nanodiamonds began to retain drugs better and more slowly "give them away”.

In the experiments, such drugs as methylprednisolone and dexamethasone were used. They are widely used to treat many conditions, including rheumatic, skin, allergy, asthma, and chronic obstructive pulmonary disease. First, scientists placed nanodiamonds in solutions of drugs to adsorb them, and then controlled how the carriers would release the drugs bound to them.

“The ability of modified nanodiamonds to retain medicinal substances increased by more than one and a half times. At the same time, the strength of nanoparticles binding of with the adsorbed substances also increased, which ensured their longer release. For comparison, nanodiamonds without modification release more than 80% of the bound drug in nine hours, and after modification, in the same time, it takes only 50%. Using this example, we have shown the potential suitability of the modified detonation nanodiamonds for creating means of the prolonged drug delivery, which will increase their therapeutic efficiency, ” said Vladimir Bondar’, Doctor of Biological Sciences, Head of the Laboratory of Nanobiotechnology and Bioluminescence at the Institute of Biophysics SB RAS.