Since the discovery of leptin in the 1990s, researchers have wondered, how does leptin, a hormone made by body fat, suppress appetite? Despite tremendous gains in the intervening three decades, many questions still remain. Now, a new study in mice describes novel neurocircuitry between midbrain structures that control feeding behaviors that are under modulatory control by leptin. The study appears in Biological Psychiatry, published by Elsevier.

John Krystal, MD, editor of Biological Psychiatry, said of the findings, “Omrani and colleagues shed light on how, in non-obese animals, leptin puts the brakes on overeating."

Leptin acts as a critical link between the body and the brain, providing information about metabolic state and exerting control over energy balance. The importance of leptin is illustrated by the finding that animals deficient for leptin rapidly become obese without its regulatory stop on feeding behavior.

Roger Adan, PhD, of the Department of Translational Neuroscience, University Medical Center Utrecht and University Utrecht, the Netherlands, who led the study, said, “This process is shaped by communication between bodily fat storages (via a hormone called leptin) and the brain’s dopamine reward system. This leptin-dopamine axis is critically important for body weight control, but its modes of action were not well understood.”

Leptin suppresses eating by signaling to brain regions that control eating behaviors, but it also decreases the reward value inherent in foods, engaging the brain’s dopamine (DA) reward system. That food-reward pathway was known to involve dopaminergic neurons of the ventral tegmental area (VTA) signaling to the nucleus accumbens (NAc), but most of those DA neurons do not contain receptors for leptin. 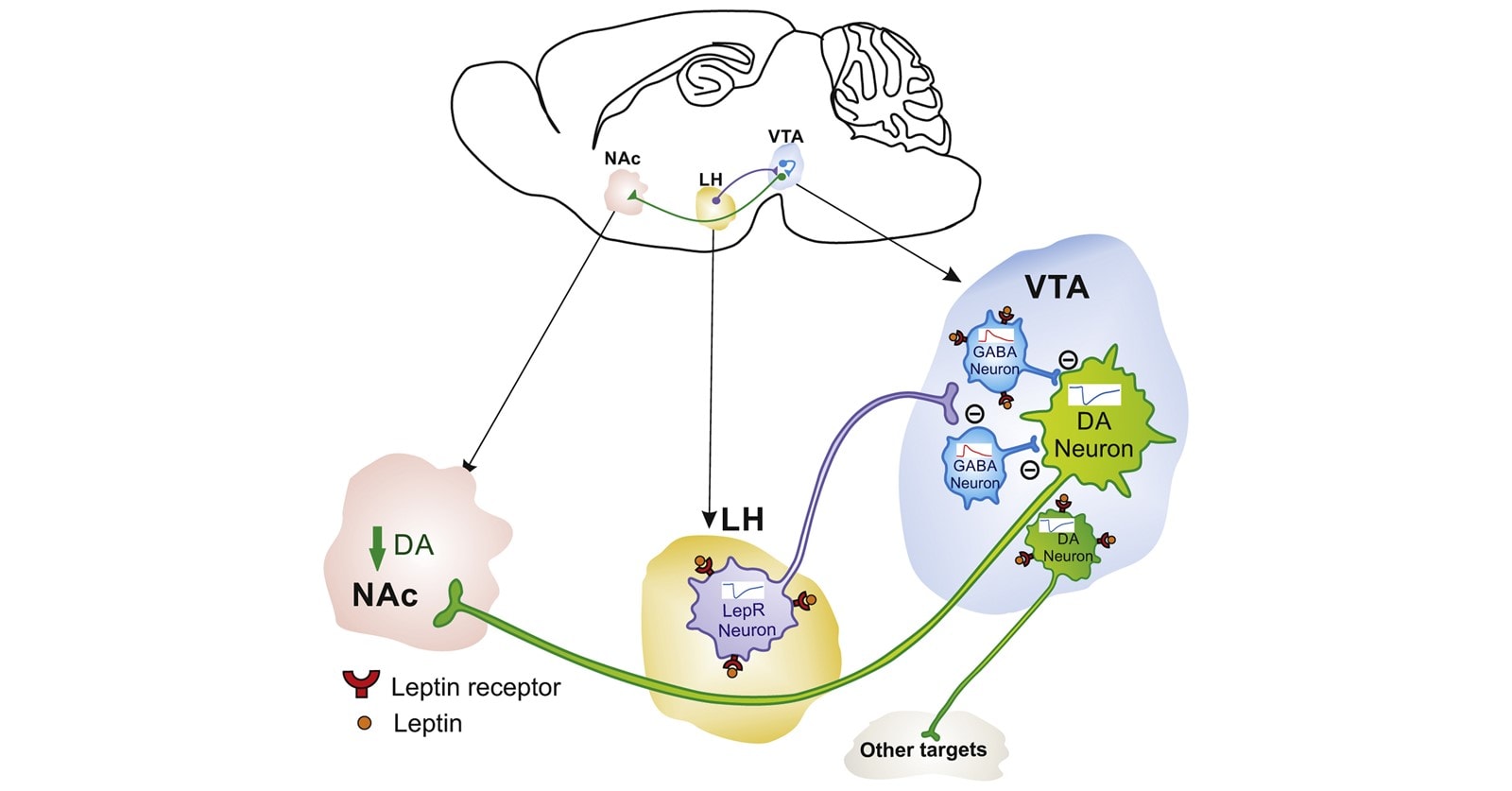 Summary diagram of the modulatory effect of leptin on the mesolimbic DA system.


The work used a combination of powerful technologies, including optogenetics, chemogenetics and electrophysiology to map the new microcircuitry.

“Although leptin receptors are present on [some] dopamine neurons that signal food reward,” said Professor Adan, also of the Department of Translational Neuroscience, University Medical Center Utrecht and University Utrecht, “we discovered that leptin receptors are also present on inhibitory neurons that more strongly regulate the activity of dopamine neurons. Some of these inhibitory neurons suppressed food seeking when [animals were] hungry, whereas others [did so] only when [animals were] in a sated state.”

Dr. Krystal said of the study, "It turns out that leptin plays key modulatory roles in an elegant circuit that unites midbrain and limbic reward circuitry. By inhibiting hypothalamic neurons and ultimately suppressing the activity of dopamine neurons in the midbrain that signal reward and promote feeding, leptin reduces food intake in animals under conditions when caloric intake has exceeded energy use.”

Ultimately, Professor Adan said, “Targeting these neurons may provide a new avenue for the treatment of anorexia nervosa and to support dieting in people with obesity.”