The immune system actually wants to fight SARS-CoV-2 with antiviral signaling molecules. But a research team from Charité and MDC has now shown how such a signaling molecule can promote the replication of the virus. The results have been published in the journal "EMBO Molecular Medicine".

Most people infected with SARS-CoV-2 are able to recover from the disease at home – even if they might experience very stressful disease progressions. Some have no symptoms at all. But about ten percent of those affected become so severely ill that they have to be treated in a hospital. The assumption that a weak immune system is behind a severe progression is short-sighted. Especially with critical progressions, the immune system works under intense pressure, but does not manage to control the virus.

A Berlin research group has now observed how SARS-CoV-2 uses an immune system defense mechanism to increasingly hijack the body’s mucous membrane cells and multiply there. Their study has just appeared in the journal EMBO Molecular Medicine. “This may give us part of the explanation as to why the immune system has difficulty regulating or even defeating the infection in some people,” says Dr. Julian Heuberger, scientist at the Division of Hepatology and Gastroenterology in Charité – Universitätsmedizin Berlin’s Medical Department. He is the first author of the study and a member of an Emmy Noether Research Group led by PD Dr. Michael Sigal at Charité and the Berlin Institute for Medical Systems Biology (BIMSB), part of the Max Delbrück Center for Molecular Medicine in the Helmholtz Association (MDC). For the study, the research group cooperated with researchers from the Max Planck Institute for Infection Biology (MPIIB), Freie Universität Berlin and Hong Kong University.

SARS-CoV-2 uses defense mechanism as a port of entry

Actually, the human body has a very effective defense mechanism against invaders, based on the interaction of various immune cells. T cells play an important role in this: When they encounter viruses in the organism, they destroy the affected cells. They also secrete the signaling molecule interferon-gamma (IFN-ƴ). On the one hand, IFN-ƴ fights infectious agents. On the other hand, it calls other immune cells to the scene.

Heuberger and his colleagues have now shown how SARS-CoV-2 can turn this protective mechanism mediated by IFN-ƴ into its opposite. For in addition to immune cells, the body’s mucous membrane cells also respond to IFN-ƴ by forming more ACE2 receptors. SARS-CoV-2 needs these ACE2 receptors as a port of entry into the cells. Infected cells, in turn, make more ACE2. In this way, both the IFN-ƴ response of epithelial cells and the virus itself intensify the SARS-CoV-2 infection. 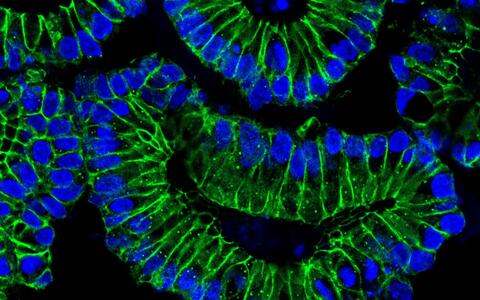 Intestinal organoids: After treatment with IFN-ƴ, the intestinal cells differentiate. The cell nuclei (blue) of the epithelial cells (green) localize at the basal (outer) edge of the organoids. This is accompanied by an increased production of the ACE2 receptor, which SARS-CoV-2 uses as a port of entry into the cells


Patients infected with SARS-CoV-2 sometimes show gastrointestinal symptoms. In order to observe the immune cascade in the intestinal cells, Heuberger cultivated organoids of the human colon. An organoid is a kind of mini-organ in a petri dish, barely the size of a pinhead. The colon organoids are based on cells that come from intestinal biopsies. They grow in three-dimensionally arranged units and replicate the physiology of mucous membrane cells in the human intestinal tract. “These colon organoids are a very helpful tool,” Heuberger emphasizes. “We can use them to explore the complex interplay of different signaling pathways that control cell differentiation from stem cells to specialized epithelial cells.”

The scientists first treated the cultured intestinal cells with IFN-ƴ to simulate the body’s immune response. Then they infected the organoids with SARS-CoV-2. Using gene expression analysis and a laser scanning microscope – a special optical microscope that scans a sample point by point – they were able to measure increased ACE2 expression in the organoids. In addition, quantitative polymerase chain reaction (PCR) detected increased virus production.

“We hypothesize that a strong immune response may increase the susceptibility of mucous membrane cells to SARS-CoV-2,” says the head of the study, Dr. Michael Sigal. He directs the Gastrointestinal Barrier, Regeneration and Carcinogenesis Lab at Charité and the MDC and is a gastroenterologist at Charité. “If the IFN-ƴ concentration is higher from the outset or the infection triggers a very excessive production of IFN-y, the viruses probably have an easier time entering the cells.” However, the conditions under which this actually happens must still be investigated in clinical trials.

The results of the study carry the idea of a treatment approach for severe COVID-19 courses, Heuberger feels: “One possible strategy could be to balance the IFN-ƴ response with drugs.” However, this would first require a very detailed analysis of the mechanisms underlying the IFN-ƴ response.