Gene transfer is seen as a hopeful therapy for Alzheimer’s and Parkinson’s patients. The approach involves using harmless laboratory-produced viruses to introduce important genes into the brain cells. In a study on mice, a team of researchers from Vetmeduni Vienna for the first time investigated how far these viruses spread in the brain and which cells they infect. Some of the artificial viruses travelled from the injection site in the brain as far as the olfactory bulb or the cerebellum and infected not only neurons but also other cells. The results, which were published in the journal Histochemistry and Cell Biology, could help to improve the selection of suitable viral “gene transporters” for custom therapies using gene transfer. 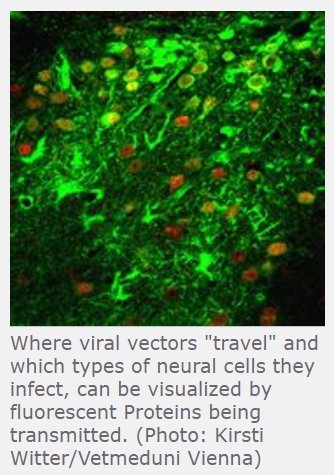 Purposefully infecting brain cells with viruses may seem somewhat odd. But for patients suffering from neurodegenerative diseases such as Alzheimer’s or Parkinson’s, this type of therapy could be a glimmer of hope. The viruses used in this approach do not trigger any disease themselves. They serve as harmless transporters for genes specifically intended to treat these disorders. The therapy, called gene transfer, uses the ability of viruses to insert their genes into the genome of a host cell. This method could therefore be used to purposefully introduce helpful genetic information into neurons.

Viruses suitable for gene transfer are injected into the brain. Previously, however, there had been no studies of how far the viral transporters can spread from the injection site. Earlier studies had usually only investigated the immediate area around the injection canal. A new study with mice has now shown for the first time that some of the tested viruses can travel long distances into different areas of the brain. “In our study, we injected the viral vectors into key areas of the cerebrum responsible, among other things, for the coordinationof body movement ,” explains Kirsti Witter from the Institute for Anatomy, Histology and Embryology at Vetmeduni Vienna. From there, some of the viruses spread into distant areas such as the cerebellum or the olfactory bulb.

“This information is important because, depending on the type of neurodegenerative disease, it may be desirable to have as broad a distribution of the virus as possible or to infect a specific, strictly delimited area,” says first author Juraj Hlavaty. “This study also shows that all tested viruses can infect the neurons and the surrounding glial cells as expected. Depending on the type of virus, however, there were differences in the number and ratio of the infected cell types.”

Inflammation could influence which brain cells are infected

Depending on the virus strain used, the injection triggered a mild or more pronounced reaction of the nerve tissue in the treated mice. The stronger the immune response, the more glial cells were infected. “The fact that individual viruses infected these cells better than the neurons must, however, still be confirmed in future experiments,” says Hlavaty.

The results of the work, achieved in collaboration with the University of West Bohemia, Pilsen, Czech Republic, and the Paul-Ehrlich-Institute, Langen, Germany, should contribute to improve the selection of viral transporters. “The goal is to create a toolbox of possible viruses in order to choose exactly the right transporter for the custom treatment of a neurodegenerative disease,” says Witter.

Copies of lentiviruses are especially well-suited for gene transfer therapy. “The genome of laboratory-produced lentiviruses consists only of areas that are necessary for the infection and incorporation into the genome. This represents a fundamental difference between these viruses and naturally occurring pathogenic viruses,” explains Hlavaty. Through the ability of the artificial viruses to enter a host, the inserted human genes are introduced into the infected cells to assume the tasks that the patients’ cells no longer perform themselves.