Researchers remain perplexed as to what causes dementia and how to treat and reverse the cognitive decline seen in patients. 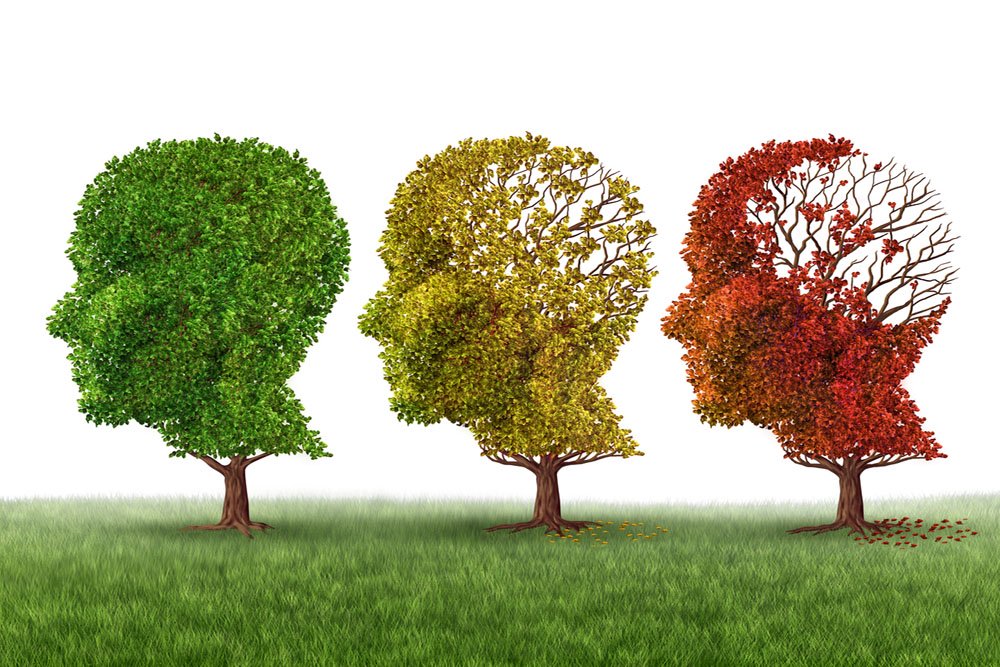 Alzheimer's disease results in brain aging and the progressive loss of memory as represented by the loss of leaves (licensed from istockphoto.com).

In a first-of-its-kind study, researchers at the Medical University of South Carolina (MUSC) and Beth Israel Deaconess Medical Center (BIDMC), Harvard Medical School discovered that cis P-tau, a toxic, non-degradable version of a healthy brain protein, is an early marker of vascular dementia (VaD) and Alzheimer’s disease (AD). Their results, published on June 2 in Science Translational Medicine, define the molecular mechanism that causes an accumulation of this toxic protein. Furthermore, they showed that a monoclonal antibody (mAb) that targets this toxic protein was able to prevent disease pathology and memory loss in AD- and VaD-like preclinical models. Additionally, this treatment was even capable of reversing cognitive impairment in an AD-like preclinical model.

“We believe our findings have not only discovered cis P-tau as a previously unrecognized major early driver of VaD and AD but also identified a highly effective and specific immunotherapy to target this common disease driver for treating and preventing AD and VaD at early stages,” said Onder Albayram, Ph.D., co-lead author and assistant professor in the Division of Cardiology in the Department of Medicine at MUSC.

“The genomic landscape really adapts after the silencing of this toxic protein. That was a big discovery.” -- Dr. Onder Albayram


Aging is a normal part of life – we experience weakening of our bones and muscles, stiffening of our blood vessels and some memory lapses. But for around 50 million people worldwide, these memory lapses become progressively more severe, ultimately leading to a diagnosis of dementia.

Dementia is an umbrella term that covers AD, which accounts for 60% to 80% of cases; VaD, the second most common cause; and other less common pathologies. Currently, there are no effective treatments for AD. Interestingly, most AD cases have a vascular component, suggesting a broader relationship between cognitive function and healthy brain vasculature. A better understanding of that relationship could provide a platform to discover novel therapeutic targets.

“Our work provides evidence that cis P-tau may be a pathogenic factor that explains VaD, which is not generally linked to other dementias,” added Chenxi Qiu, Ph.D., co-lead author and a postdoctoral research fellow at BIDMC, Harvard Medical School.

In a preclinical model of VaD, young mice showed signs of brain inflammation and memory loss within one month. However, treating these mice with the cis P-tau mAb prevented neural degradation and cognitive decline out to six months. In a separate preclinical model of AD, old mice showed severe cognitive impairment. Excitingly, this severe impairment was significantly reversed when mice were given the cis P-tau mAb.

“These data show that cis P-tau could be an early upstream pathogenic factor common to both diseases,” said Albayram.


Translating information gained from preclinical models to humans is often difficult, but this study offers reasons to be optimistic. Accumulation of cis P-tau caused dramatic changes in the genetic architecture of affected cells in a VaD model; these changes were consistent with those seen in human AD patients. The researchers went on to show that treatment with the cis P-tau mAb reversed 85% to 90% of those changes suggesting the power of this potential therapy.

“The genomic landscape really adapts after the silencing of this toxic protein,” said Albayram. “That was a big discovery.”

Not only are Albayram and Qiu excited about these findings, but colleagues at MUSC are already quite enthusiastic about this work.

“I can go on and on about this paper,” said Adviye Ergul, M.D., Ph.D., professor in the College of Medicine, Department of Pathology and Laboratory Medicine at MUSC. “They provide robust evidence that there is accumulation of a specific form of the tau protein – cis P-tau – that highlights a different tau protein pathology in VaD research.”

This groundbreaking research has opened the door for new potential immunotherapies and highlighted several new areas of research that need to be explored. While the researchers delineated a pathway that leads to the accumulation of cis P-tau, the underlying linkage between vascular abnormalities and activation of the pathway needs to be identified. A better understanding of how toxic cis P-tau interacts with the healthy trans P-tau could provide further insights into the progression of AD disease.

AD and VaD might not be the only diseases affected by high levels of cis P-tau. Other brain disorders with a vascular component might also arise from this toxic protein, but further study will be required to establish such a link.

As we get older and our memory begins to lapse – misplacing our car keys or forgetting the name of a new acquaintance – we fear the possibility that these are the first signs of dementia. And while there is currently no approved treatment to reverse the physiological effects of dementia, this new research may provide hope that new therapies are around the corner.

About the Author
Matthew Greseth, Ph.D.
Matthew Greseth is a postdoctoral researcher in the Department of Biochemistry and Molecular Biology and assistant director of science communications initiatives in the College of Graduate Studies.