Scientists find evidence that clusters of proteins associated with Parkinson’s and other diseases can induce a toxic process involving glutamate, a neurotransmitter. 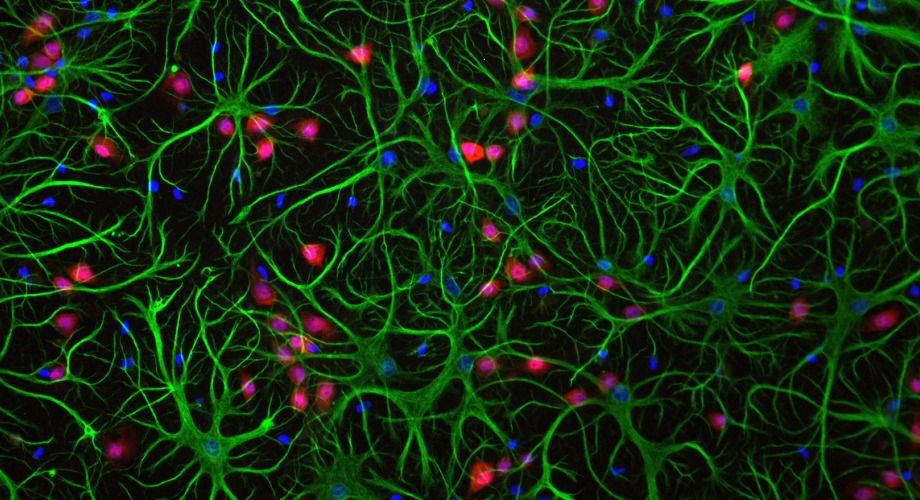 Astrocytes (green), normally act as "helper" cells for the brain. However, a new study shows that in certain diseases, small protein clusters induce these cells to produce excessive amounts of the neurotransmitter glutamate, which damages neurons (red). (Stock image)


Scientists at Scripps Research have discovered a brain-harming process that may be active in Parkinson’s disease and other neurodegenerative conditions—yet may be treatable with an experimental drug now under development.

The discovery, published in the Journal of Neuroscience, concerns a protein called alpha synuclein, which is produced in neurons and other cell types in the brain. In people who have Parkinson’s, Lewy body dementia, multiple system atrophy and some other neurodegenerative conditions, alpha synuclein accumulates in abnormal clusters in the brain. Prior research has demonstrated that these clusters can harm neurons—but how it does so hasn’t been entirely clear.

“We discovered a new mechanism by which abnormal alpha synuclein causes injury to the brain, and we have a potential drug candidate that seems to prevent that injury,” says study senior author Stuart Lipton MD, PhD, Step Family Foundation Endowed Chair in the Department of Molecular Medicine and founding co-director of the Neurodegeneration New Medicines Center at Scripps Research. Lipton is also a clinical neurologist who sees these patients.

The researchers also found, for the first time, that an experimental drug called NitroSynapsin can prevent this harmful effect by blocking excessive activity of the neuronal glutamate receptors, while leaving normal synaptic activity essentially unchanged. NitroSynapsin is meant to be an improved version of the drug memantine (marketed as Namenda®), which Lipton previously developed and patented for neurodegenerative disorders and is currently FDA-approved for Alzheimer’s disease.

Parkinson’s disease affects about one million people in the United States and about 10 million worldwide. Although it is known mainly as a movement disorder, it appears to involve a characteristic pattern of neuronal loss that spreads slowly through multiple areas of the brain, ultimately manifesting as delusions and dementia. Abnormal protein deposits, consisting mostly of aggregated alpha synuclein, appear to drive this spread of neuronal damage.

Similar alpha synuclein-rich protein deposits are found in the brain of people with a common dementia condition called Lewy body dementia and in a rarer neurodegenerative disorder called multiple system atrophy, or MSA. Additionally, abnormal clusters of alpha synuclein have been noted in the autopsied brains of people who died of Alzheimer’s disease.

However, the mechanism by which alpha synuclein causes damage to neurons in these conditions has remained largely unknown. In part for this reason, there has never been a disease-slowing treatment for any of these disorders.

In laboratory experiments, the researchers found that alpha synuclein oligomers, when added to cultures of astrocytes derived from human stem cells or from mouse brains, induced the astrocytes to produce excessive glutamate. Similarly, in living mice, overproducing these alpha synuclein clusters led to a significant rise in brain levels of glutamate.

It has long been known that too much glutamate can overexcite neurons and cause them to lose their synapses, the connections between nerve cells, and even lead to cell death. This process is recognized as a contributor to brain damage after stroke and in other neurological conditions, and is even suspected as a factor in many cases of autism.

Lipton’s team found evidence that alpha synuclein oligomers can trigger this process: In living mouse brain tissue and in human stem cell-derived tissue. The excess glutamate induced by alpha synuclein significantly increased the activity of glutamate receptors on neurons. Over time, this process was associated with the loss of synapse-bearing structures called synaptic spines, a loss that is often a precursor to neuron death. Compounds that block glutamate receptor activity were able to preserve these spines.

Another surprise finding was that the alpha synuclein oligomers, apart from their indirect effect on glutamate receptor signaling via astrocytes, appeared to directly stimulate glutamate receptors on neurons. Thus, these tiny protein structures may harmfully overexcite neurons via two distinct routes.

One of the glutamate receptor-blocking compounds used in the study is NitroSynapsin, which Lipton and colleagues developed as a potential treatment for conditions involving glutamate toxicity. He and colleagues now hope to investigate its potential as a treatment for Parkinson’s and other synucleinopathies, as well as for additional neurologic diseases. Lipton recently licensed this drug to the Boston-area biotech company EuMentis Therapeutics Inc., which is developing the drug further for human clinical trials.