Base editing is a novel gene editing approach that can precisely change individual building blocks in a DNA sequence. By installing such a point mutation in a specific gene, an international research team led by the University of Zurich has succeeded in sustainably lowering high LDL cholesterol levels in the blood of mice and macaques. This opens up the possibility of curing patients with inherited metabolic liver diseases. 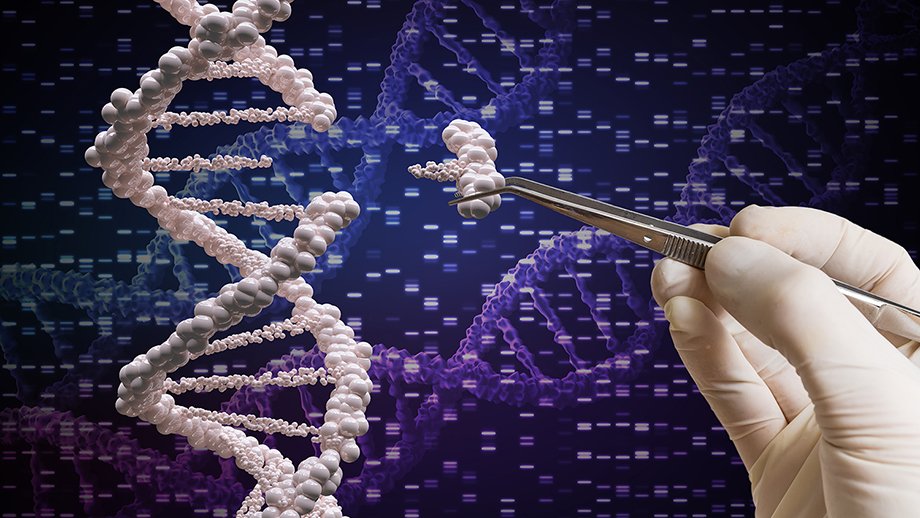 Using "base editors" a single DNA building block can precisely be exchanged in a living organism. (Image: iStock.com/vchal)

Lipoproteins are complex particles that deliver fat molecules to all tissues of the body through the blood system, supplying energy to the cells. One such lipoprotein, the low-density lipoprotein (LDL), can transport thousands of fat molecules, such as cholesterol, per particle. High levels of LDL in the blood are clinically associated with an increased risk of cardiovascular diseases. Since LDL can also carry cholesterol into smaller vessels and thus supply more distant tissues, it can increasingly block the artery lumen, which leads to atherosclerosis.

An international research team led by the University of Zurich (UZH) has now demonstrated that a novel precise gene editing approach can reduce high LDL cholesterol levels – substantially and sustainably. The scientists introduced a single point mutation in the gene encoding for an enzyme called PCSK9. This protein is involved in the uptake of LDL cholesterol from the blood into the cells. “The genetic change we induced in mice and macaques successfully blocked PCSK9, which led to a significant reduction of the LDL cholesterol concentrations in the blood. This provides a potential therapy for patients suffering from familial hypercholesterolemia, an inherited form of high cholesterol levels,” says study leader Gerald Schwank, professor at the Institute for Pharmacology and Toxicology of UZH.

The gene editing technology applied by the researchers uses what are known as base editors. These proteins can change individual bases of the DNA molecule – a single “letter” of a genetic “text” – into another. Adenine base editors, for example, convert an adenine (A) into a guanine (G). And base editors do this much more precisely than previous CRISPR-Cas nucleases, which function as molecular scissors. To control the delivery of the base editor tool into the liver of animals, the researchers adapted the RNA technology used in COVID-19 vaccines. However, instead of encapsulating an RNA encoding the spike protein of SARS-CoV2 into lipid nanoparticles, they encapsulated an RNA encoding for the adenine base editor.

The RNA-lipid nanoparticles formulations were introduced into the animals intravenously, leading to liver-specific uptake and transient production of the base editor tool by the cell machinery. “Up to two-thirds of PCSK9 genes were edited in the mice and up to one-third in the non-human primates, leading to a significant reduction in LDL cholesterol levels,” says Schwank. In addition, the scientists carefully assessed whether unspecific editing at undesired locations occurred, but found no indications of such off-target events.

“Our study shows the feasibility of installing single nucleotide base changes in the liver of non-human primates with high efficiency and accuracy. Approximately 30 percent of all disease-causing hereditary mutations are single base mutations that can, in principle, be corrected with base editors,” says Schwank. The new approach could therefore be used to treat a large number of patients suffering from inherited metabolic liver diseases, such as hypercholesterolemia, phenylketonuria or urea cycle disorders. Compared to conventional drugs, genome editing has the advantage that induced changes are sustainable. Thus, if a mutation is repaired in a sufficient number of cells, the patient will be permanently cured.