Despite surgery and subsequent treatment with chemotherapy and radiation, the majority of patients experience recurrence of malignant brain tumours. Researchers at Linköping University, Sweden, and the Medical University of Graz, Austria, have shown in cells in culture that an ion pump can deliver drugs more accurately, which gives less severe adverse effects in chemotherapy. 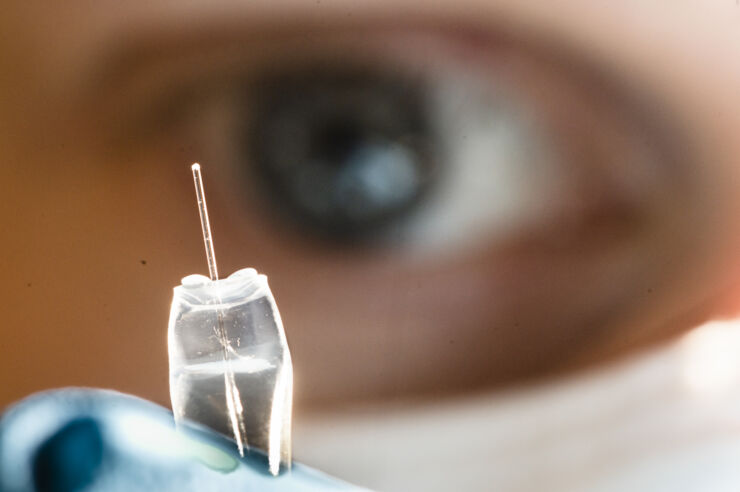 In the future, an implanted ion pump can be used to get around the blood-brain barrier and supply gemcitabine directly into the brain with high precision
Thor Balkhed

“This is the first time an ion pump has been tested as a possible method to treat malignant brain tumours. We used cancer cells in the lab, and the results are extremely promising. However, it will probably take five to ten years before we see this new technology used in treatments for brain tumours”, says Daniel Simon, associate professor at the Laboratory of Organic Electronics at the Department of Science and Technology at Linköping University.

The scientists have used cells from glioblastoma, which is the most common and most aggressive type of cancer that can arise in the brain. When a brain tumour is surgically removed, small parts of the tumour are often left behind, embedded between the brain cells. Daniel Simon
Daniel Simon, associate professor at the Laboratory of Organic Electronics.
Photo credit Thor BalkhedEven high-precision surgery cannot remove these cells without damaging the surrounding healthy brain tissue. This means that radiation treatment and chemotherapy are used to stop the recurrence of the tumour.

In Sweden, around 30 cytostatics are available to treat different types of cancer. These chemotherapy agents are most often given either intravenously or as a tablet. But in order to reach the brain, they must first spread through the circulatory system and then pass through the blood-brain barrier. The walls of the small blood vessels in the brain are much less permeable than blood vessels in the rest of the body, and can prevent many substances in the blood entering the brain. Thus, only a few drugs that work against cancer can pass through.

Gemcitabine is currently used to treat cancers in the pancreas, bladder and breast, where it acts by disrupting the cell division process in rapidly growing tumours. This means that gemcitabine does not affect brain cells, since these do not, in general, undergo cell division.

“The traditional glioblastoma treatment currently used in the clinics harms both cancer and neuronal cells to the same extent. However, with the gemcitabine ion pump, we tackle only the cancerous cells, while neurons stay healthy. In addition, our experiments on cultured glioblastoma cells show that more cancer cells are killed when we use the ion pump than when we use manual treatment”, says Linda Waldherr, postdoctoral fellow at the Medical University of Graz. She has conducted the study together with researchers at Linköping University.

When the ion pump is to transport gemcitabine from an electrolyte reservoir into cells or a tumour, a low current is used to “pump” the positively charged drug through an ion transport channel. The method is known as electrophoresis. The ion pump needs only a low current to pump the gemcitabine, which is an advantage since it avoids the risk that brain cells are activated and transmit unintended nerve signals.

The low current and voltage also mean that eventual therapeutic technology will not require large power supplies or batteries to operate.

Rainer Schindl, associate professor at the Medical University of Graz, describes other advantages.

“The pressure inside the brain is extremely sensitive, and using an ion pump to transport the drug instead of a fluid-driven device means that the pressure is not affected. Also, the dosage is controlled by electrical charging, which makes the supply of the chemotherapy agent extremely precise. The next step will be to use the ion pump to evaluate different chemotherapy agents that have previously given adverse effects that are too serious or that are unable to pass the blood-brain barrier”, he says.

Principal funding bodies for the research have been The Austrian Science Fund, the Knut and Alice Wallenberg Foundation, and the Swedish Foundation for Strategic Research. 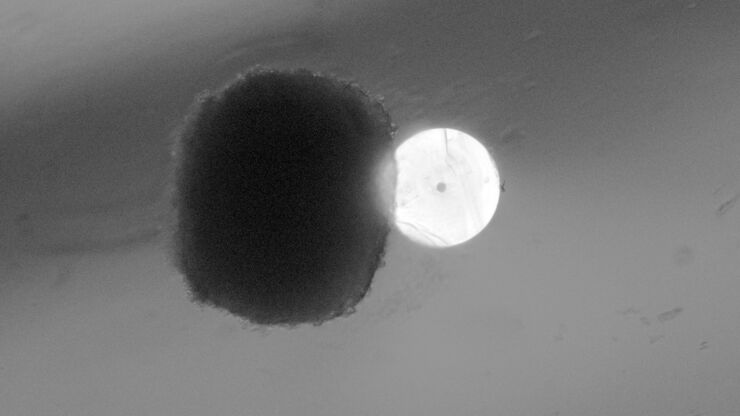 The white circle is a cross section of a glass capillary which measures just over 200 nanometers in diameter. The black dot in the middle is the actual channel in which the drug is transported. Next to the glass tube is a glioblastoma sphere. The Medical University of Graz