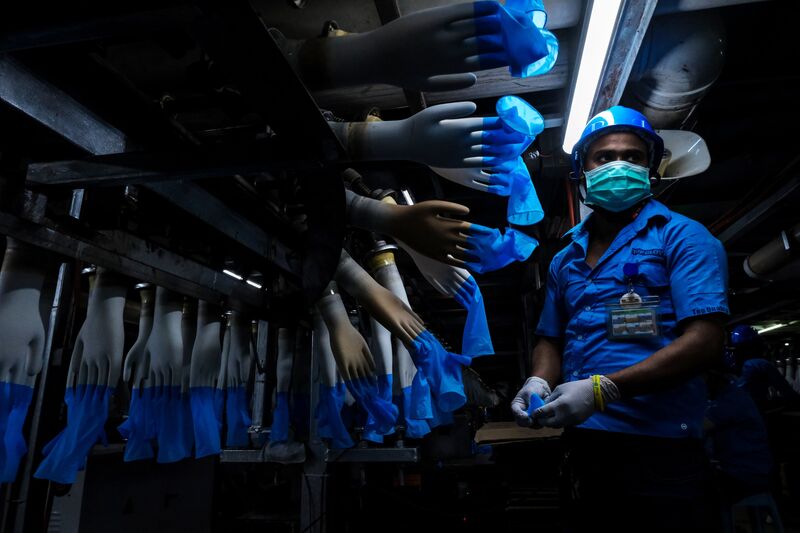 A production line at a Top Glove Corp. factory in Setia Alam, Malaysia.

In Southeast Asia, makers of rubber gloves are attracting more investor fervor than even the electric cars and flame throwers of Elon Musk. Top Glove Corp. is up 389% this year in Kuala Lumpur, the most on the MSCI Asia Pacific Index, while Supermax Corp. has leaped more than 1,000%, compared with Tesla’s 259%. That’s due to the boom in glove demand thanks to the coronavirus pandemic, aided by a short-selling ban in Malaysia till year-end.

The meteoric rise has been unprecedented by Malaysian standards, with the top three glove makers adding about 109 billion ringgit ($26 billion) in combined market value this year. More than $1 of every $10 invested in the nation’s stock market right now is a bet on gloves -- a feat that makes the Southeast Asian nation a play on global hygiene, much like South Korea and Taiwan are for semiconductors. Top Glove resumed its rally Friday even after the U.S. moved to block imports from two of its units.

“The rally in glove makers reminds many of Tesla but the sector’s earnings outlook is more certain than that of Tesla,” said Ross Cameron, a fund manager at Northcape Capital Ltd., which overseas about $7 billion in assets globally. The short-selling ban has had a minor contribution to the rally while “we expect the sector to report significantly more than 100% earnings growth next year,” he said. 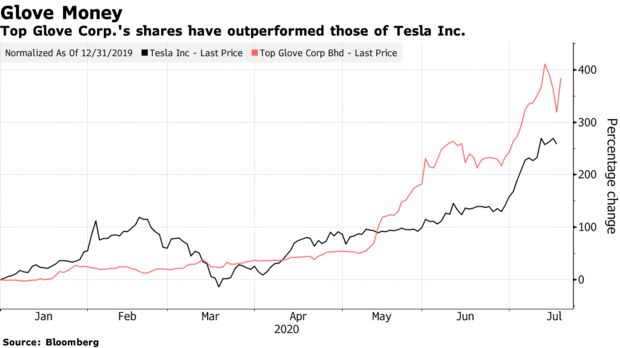 Fund managers at Northcape and Samsung Asset Management have increased their bets on the sector this year, saying the shift in glove demand is structural and many market participants are still behind the curve.

Some of the glove makers are planning bonus share issues after this year’s eye-popping rally. The odds of some stocks getting more institutional allocation are set to increase as the companies have become big enough to be included in key indexes followed by international investors.

Supermax and Kossan Rubber Industries Bhd. are set to join the MSCI Malaysia Index after a review next month due to the meteoric rise in their stock price, Brian Freitas, an analyst on Smartkarma wrote in a note last week. “The stocks now rank very highly on free float market cap,” the note added. Kossan shares have climbed 225% year-to-date.

Still, a faster-than-expected development of a vaccine to treat Covid-19 risks putting the brakes on the spectacular rally in glove makers’ shares. The U.S. Customs and Border Patrol has placed a detention order on disposable gloves made by Top Glove. Top Glove said in a statement on Thursday that the issue may be linked to foreign labor and it is reaching out to U.S. Customs to seek to resolve the matter within two weeks. 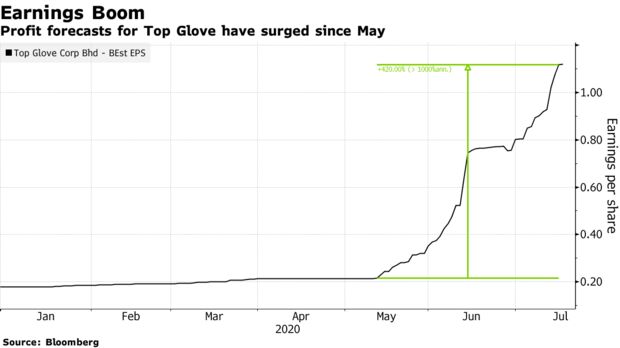 Fund managers and analysts said the company could still ship its gloves to the U.S. using other units. Also any cancellation of orders would be offset by demand from other countries due to the acute shortage.

For now, the order books have swelled, glove prices have skyrocketed and companies are aggressively expanding their capacity to meet orders.