Hepatocytes — the chief functional cells of the liver — are natural regenerators, and the lymph nodes serve as a nurturing place where they can multiply. 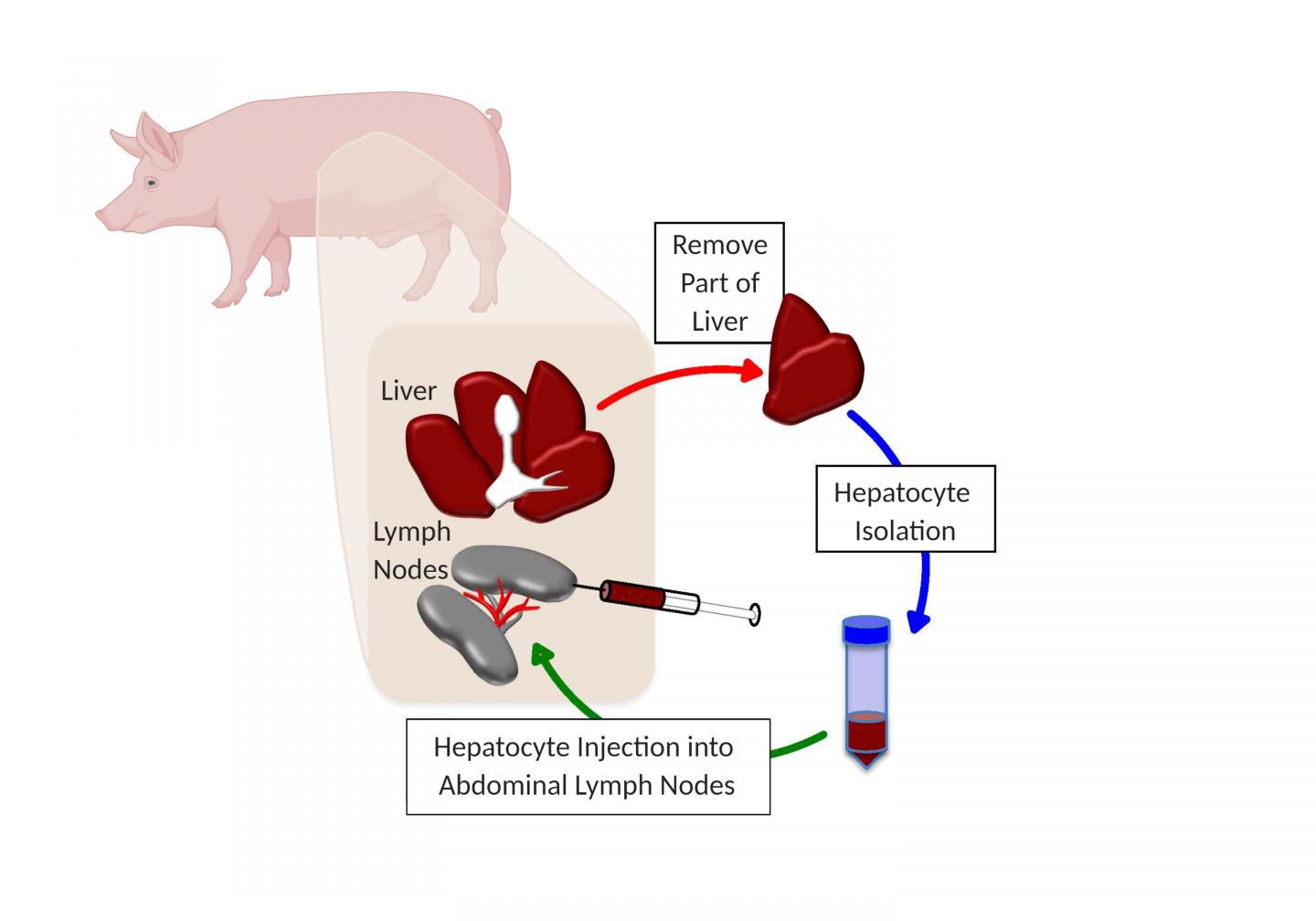 In a new study published online and appearing in a coming issue of the journal Liver Transplantation, researchers at the University of Pittsburgh School of Medicine showed that large animals with ailing livers can grow a new organ in their lymph nodes from their own hepatocytes. A human clinical trial is next.
“It’s all about location, location, location,” said senior author Eric Lagasse, Pharm.D., Ph.D., associate professor of pathology at Pitt “If hepatocytes get in the right spot and there is a need for liver functions, they will form an ectopic liver in the lymph node.”
The cells of the liver normally replenish themselves, but need a healthy, nurturing environment to regenerate. However, in end-stage liver disease, the liver is bound up by scar tissue and too toxic for the cells to make a comeback.
“The liver is in a frenzy to regenerate,” said Lagasse, who also is a member of the McGowan Institute for Regenerative Medicine and the Pittsburgh Liver Research Center. “The hepatocytes try to repair their native liver, but they can’t and they die.”
Nearly a decade ago, Lagasse noticed that if he injected healthy liver cells into the lymph nodes of a mouse, they would flourish, forming an auxiliary liver to take over the tasks of the animals’ genetically induced malfunctioning liver.
But mice are small. Lagasse and colleagues needed to show that a large animal could grow a meaningful mass of secondary liver tissue to overcome liver disease.


To mimic human liver disease in pigs, the researchers diverted the main blood supply from the liver, and at the same time, they removed a piece of healthy liver tissue and extracted the hepatocytes. Those liver cells were then injected into the abdominal lymph nodes of the same animal they came from.

All six pigs showed a recovery of liver function, and close examination of their lymph nodes revealed not only thriving hepatocytes, but also a network of bile ducts and vasculature that spontaneously formed among the transplanted liver cells.

The auxiliary livers grew bigger when the damaged tissue in the animals’ native liver was more severe, indicating that the animals’ bodies are maintaining an equilibrium of liver mass, rather than having runaway growth akin to cancer.

These findings bolster the results of another recent study, in which Lagasse and colleagues at Mayo Clinic showed that healthy liver tissue grown in the lymph nodes of pigs with a genetic liver defect spontaneously migrated to the animals’ livers, where they replaced diseased cells and cured the animals’ liver disease.

So, regardless of the cause of liver disease, from hepatitis to alcoholism, Lagasse expects growing auxiliary livers in the lymph nodes will help.

This study was supported by the National Institute of Diabetes and Digestive and Kidney Diseases (R01 DK114282) and the McGowan Institute for Regenerative Medicine. Three of the authors have a financial stake in LyGenesis, which is a startup company they founded to support clinical translation.