CAR T-cell therapy is a highly promising treatment strategy for tumors, but is associated with life-threatening side effects. Researchers at EPFL, UNIL and CHUV have developed a new way to “switch off” the therapy when a cancer patient’s life is in danger, paving the way for safer immunotherapy approaches to target solid tumors.

Immunotherapy, unlike chemotherapy and radiotherapy, arms the body’s immune system to attack cancer cells. In recent years, it has proven to be remarkably successful at treating leukemia, lymphoma and other liquid cancers, or cancers present in body fluids.

Chimeric antigen receptor (CAR) T-cell therapy is a type of treatment in which a patient’s T-cells – the body’s most powerful immune cells – are extracted and engineered to recognize and kill cancerous cells. Yet when they target solid tumors, the modified T-cells can also attack healthy tissue, leading to toxicity, major organ damage and potentially even death.

A team of researchers from EPFL, the Ludwig Institute for Cancer Research at the University of Lausanne (UNIL), and Lausanne University Hospital (CHUV) have developed a new protein-based method to switch off the modified T cells on command – a sort of emergency safety net for patients who respond badly to treatment. The control system, known as STOP-CAR, has been tested and validated on mice infused with prostate cancer cells. Its discovery could speed the clinical development of new CAR therapies that were previously considered too risky. The team has published its research in the journal Nature Biotechnology.

At a basic level, the new control system works in much the same way as existing techniques. T-cells are taken from a patient’s blood then genetically modified so that special receptors – known as chimeric antigen receptors, or CARs – grow on their surface. These receptors enable the modified cell to recognize and bind to cancer cells. A signal is then generated instructing the cell to attack.

It’s at this point that the new method differs. Using computational protein design, the researchers re-engineered the receptor so that the signal generated when it binds to a tumor antigen can be switched off, effectively disabling the T-cell. 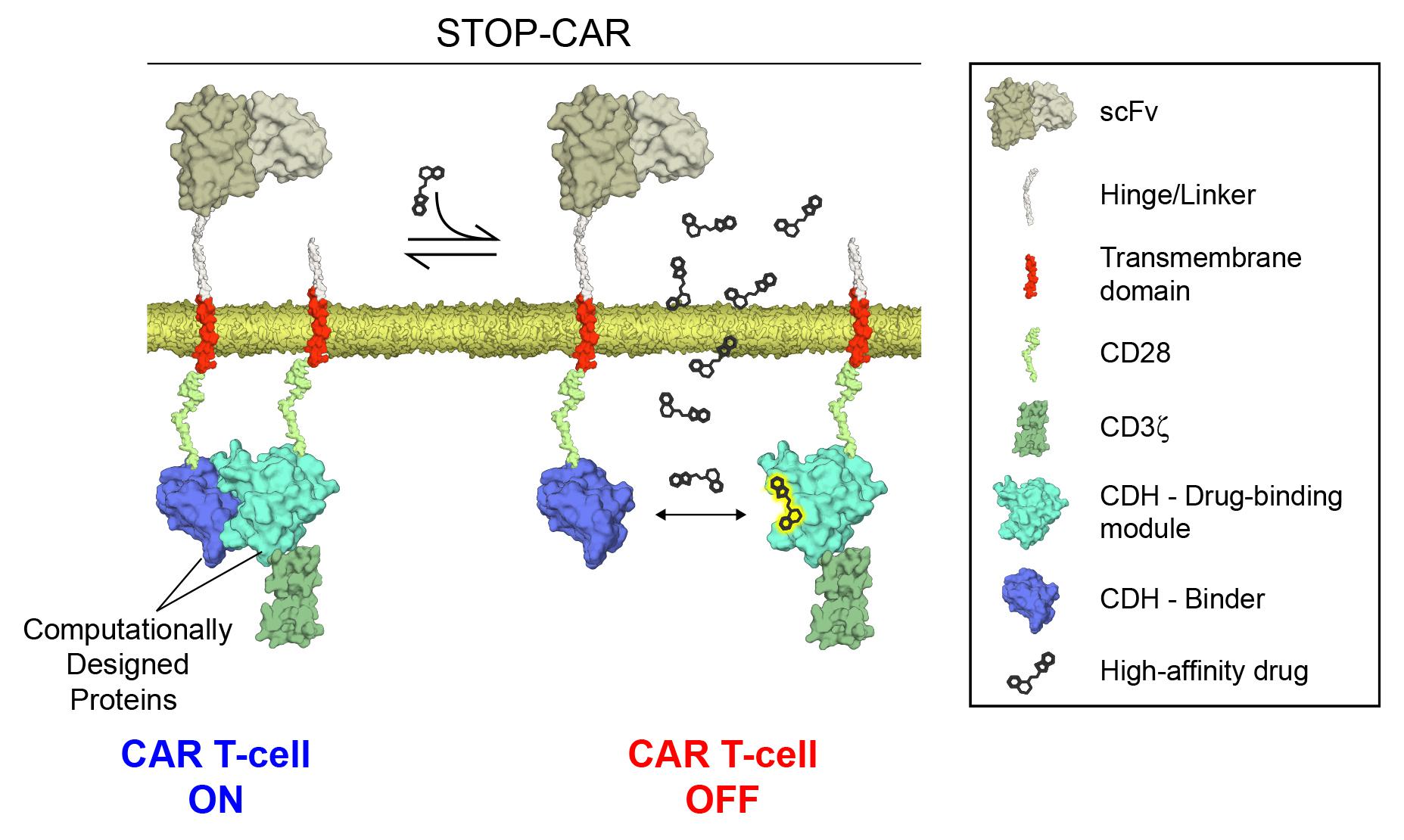 The control system involves administering a molecule to the patient as a separate drug. The T-cell contains naturally binding pairs of proteins that carry information between the receptor and the inner structure of the T-cell. The molecule breaks the interaction between these proteins, thereby disrupting the signal and effectively switching off the cell.

“The real advantage of this system is that we can switch the T-cell back on again if we stop administering the molecule,” explains Bruno Correia, one of the paper’s senior authors and a tenure-track assistant professor at the Institute of Bioengineering, part of EPFL’s School of Engineering. “There’s no need to destroy the T-cells if they pose a threat to a patient’s health. The system lets us precisely control the effects of immunotherapy”

The benefits don’t end there. Observations have shown that prolonged exposure to antigens can cause T-cell exhaustion. Switching the cells off temporarily gives them time to rest and recuperate.


“This work itself, and its potential, is really exciting,” says George Coukos, director of the Branch of the Ludwig Institute for Cancer Research “but I think it is also illustrative of how well-orchestrated, multidisciplinary collaborations can yield significant scientific breakthroughs. Working with EPFL and our other partners in the region, we hope to bring STOP-CAR-T therapy as quickly as possible to cancer patients.”

This study was supported by Ludwig Cancer Research, the Biltema and ISREC Foundations, the European Research Council, the National Center of Competence for Molecular Systems Engineering, The Marie Sklodowska-Curie Actions, Whitaker and the National Research Foundation of Korea.